NBA Finals: Dubs Fulfill the Pre-Season Prophecies, Win It All 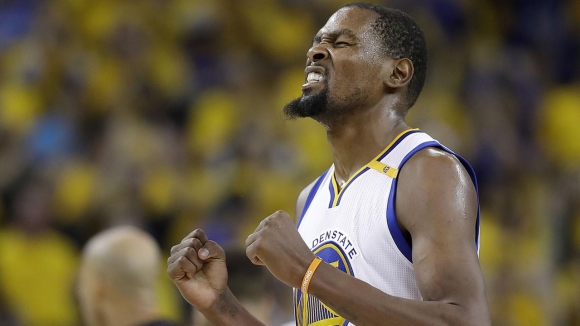 From another perspective, Dennis Green -- the late, lamented football coach -- had the perfect summation of this season's Golden State Warriors.

They were who we thought they were. And they didn't need anyone else to crown their ass.

However, the Cleveland Cavaliers didn't exactly let 'em off the hook. They had trouble enough just trying to bait it.

Wait, that was Nashville.

Still, the point is, other than shooting the lights out like they did in Game 4, what else could the Cavs realistically have done?

Not that Cleveland didn't give the superhero thing a go, but it was just too much to sustain.

And that was that.

Dubs won and covered, just as destiny said it would be.

Of course Kevin Durant would be named as the MVP. Dude's been the flashpoint of this entire quest.

He's now a villain in Oklahoma City, which is ironic, as the very fact they even have a team was built on villainy.

Besides, he'd had nine years with the franchise, part of it spent watching James Harden and Serge Ibaka skip outta town.

After that, didn't Durant get the impression that payback for the 2012 finals wasn't gonna happen if he stayed in OKC?

Why wouldn't he move to a team that gave him a legitimate shot at a ring? Especially one where his teammates understand team first is more than a PR affirmation.

And what's so wrong with a stacked squad, anyway?

It's not exactly like this is a new phenomenon:

Contrary to current belief, dynasties have consistently been a boon to their surroundings.

And as long as there are max contracts in the NBA, they're not going away in pro hoops anytime soon.

So, according to an incredible chalk line, it looks like we'll see the Dubs right about this time next year, too.