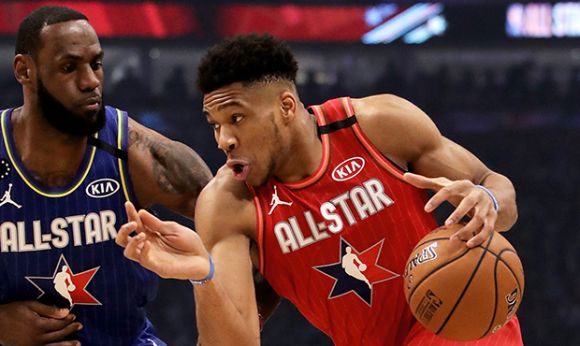 Thank you, Nick Elam. Kudos to you, Chris Paul.

State Farm's best spokesman since Jake and his khakis is the dude who breathed life into the NBA All-Star Game by suggesting the Elam Ending should be implemented into it.

Fortunately, the league brass had a significant body of data on it, thanks to the raised profile of The Basketball Tournament, and bought into it.

The Elam Ending's pure form is:

It just makes too much sense, and the NBA's best confirmed it.

This year's All-Star Game may have been the greatest one in its long history. Dudes cared, and a real game broke out.

They actually used a variation of the Elam Ending:

The upshot is that everyone won. This was an awesome game, the league's top talent at its competitive best, especially in the fourth quarter when Elam loomed with the target set at 157:

When's the last time anyone saw James Harden dish a dime when he had a shot opportunity?

Hell, when's the last time anyone saw a player take a charge in an All-Star Game?

How about the MVP being acclaimed for something besides a bushel of baskets?

Kawhi is the best defender I've ever seen.

And when's the last time anyone really cared about what went on?

Players arguing with the refs.

This game is perfect. pic.twitter.com/004pPAyL4w

There was a bitta quibbling about such an intense game ending on a free throw, but points at the stripe are a key part of the game. Besides, Kyle Lowry didn't have much choice.

Dude was mismatched against Anthony Davis because he switched on a pick to defend Davis while Joel Embiid stayed with him, leaving Harden open. Embiid then lunged out to cover Harden, so the die was cast.

It's only fitting that Paul gets the last highlight.

Dude's on record saying he wants to play for 20 seasons. To do it, he's gotta log five more years after this one. Among other things, he's gone to a plant-based diet to health himself up, and maybe it's working.

After all, this is a first-ever from the 6-footer:

😱 WHAT JUST HAPPENED? 😱@CP3 on the receiving end of an alley-oop dunk ‼️ pic.twitter.com/n7acfACevH

Suggesting an Elam Ending for the All-Star Game and eating green to show off a personal first in it.

Paul made this a day for all involved.