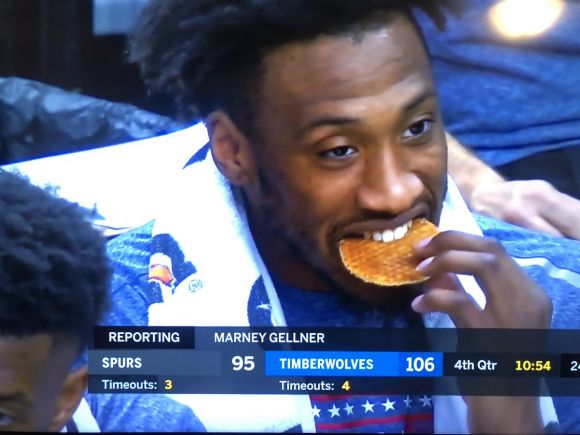 During a typical NBA game, players on the bench have some time to kill if they're not terribly interested in the game.

This vacuum can be filled with a variety of activities, including stimulating conversation with teammates and fans.

However, if you happen to be Robert Covington, you might grab a light snack.

To be more specific, he enjoyed a bench waffle.

We shit you not.

....robert covington just eating a stroopwaffle on the bench with 11 minutes to go in the 4th pic.twitter.com/xXfNTIbb3E

Clearly, the veteran journeyman required some sustenance, and his T-Wolves had a comfortable fourth-quarter lead, so why the hell not?

He did it, alright, but the type of waffle being consumed was still up for debate.

Some had identified his tasty treat as a stroopwaffle, but the consensus seems to be in the corner of the Honey Stinger waffle, which would be the healthier option:

May I introduce you to my good friend @HoneyStinger ? pic.twitter.com/CiNFv0tptU

We're so relieved that this mystery has been solved.

Regardless of the type of waffle, at least Covington didn't smother it with mustard.

Of course, since they were playing the Spurs, Coach Pop could've recommended a nice wine to pair it with.

The word is moderation, ladies.