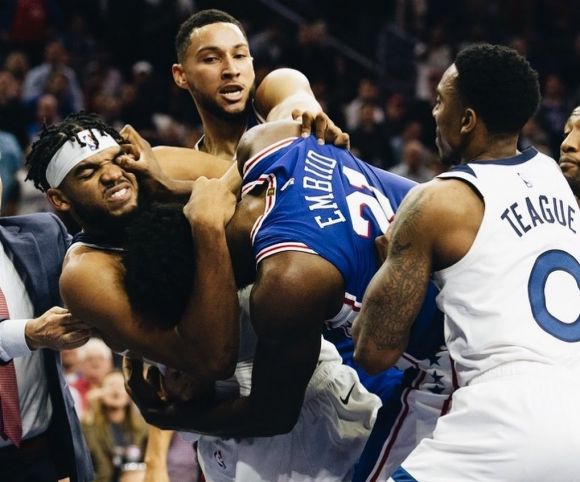 The young NBA season recently produced an actual fight on the court, as opposed to the typical harmless posturing we're usually forced to endure.

And this one was quite the doozy.

The brief but memorable encounter featured Karl-Anthony Towns and Joel Embiid, the latter providing much of the entertainment value.

A garden-variety regular season game between the Sixers and Wolves suddenly morphed into bloodsport for no apparent reason.

It's unclear who owed who what, but that shit escalated very quickly:

KAT FIGHT
(have really been waiting a long time to get to use that one)
Joel Embiid and Karl Anthony Towns go at it in Philly. Benches clear, Ben Simmons ends up with an arm around Towns' neck. pic.twitter.com/kNq6HZUPoS

There were certainly lots of things happening all at once, including Ben Simmons literally making the large KAT tap out with a fine submission maneuver:

It appears they may have exceeded the limit for assistant coaches on the floor at one time.

Brett Brown went for the “tickle fight” tactic while Embiid was looking for the eyeball 🤣🤣 pic.twitter.com/zePEC3yCJM

Joel Embiid reacts to the fight post game: "Well first of all, I ain't no...." 😂 pic.twitter.com/bY6GnL33Th

Yeah, the eye gouge was a pretty convincing clue.

Dude even endeared himself further to the city of Brotherly Love:

Embiid loved the fan appreciation for him as he left the game tonight. “I was built for this city and they were built for me... you gotta be a Broad Street bully.”

Unfortunately, this type of behavior does come with consequences: