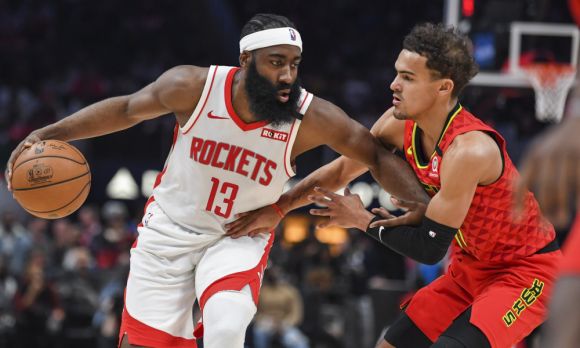 When one dude's capable of going off for a kajillion points on any given day, this was bound to happen sooner or later.

Someone else finally joined him in posting video-game numbers, so for the first time in NBA history, two opposing players turned the Houston Rockets' 122-115 victory over Atlanta's Hawks into an historic occasion:

As usual in the ATL, a crowd roughly 5000 tickets short of capacity was on hand to see it.

Too bad they didn't have another Ashley Madison Night promotion scheduled for last night.

It turned out Ashley Madison was really an army of fembots back then. Who knows what she is now, but no matter what, dudette would surely have had a better shooting percentage than Harden.

Harden gets headlines for his prolific scoring, but his efficiency rate contines to be less than breathless.

As usual, dude's point total was saved by his 19-23 productivity from the stripe, which begs the question why the Hawks and others don't take a hint from the Dubs and lay off fouling him. That they don't is clearly a concept for higher minds than ours.

Here's what the spiffed up highlights package made this duel look like:

Each team picked up 16 o-boards. That's 32 second chances. Hopefully, some came on Harden's 25 misses and Young's 19, cutting down on what woulda been a combined gross of 44 empty possessions.

Ever hear how the 24-second clock came to be?

It still took the league four years to figure out some sorta shot clock was needed.

That's when Danny Biasone, owner of the Syracuse Nationals -- now the Philadelphia 76ers -- came up with a plan:

These days, there are now roughly 200 possessions per game. Not that many missed treys result in an o-board, so let's guess it at four per team. This drops empty possessions in the Harden & Young display to 36.

That's 18% of the game's possessions -- almost one in five -- where everyone else on the court coulda just waited for Harden and Young to get in a game of H-O-R-S-E.

So, hooray for history and all that, but it took a whole lotta nothin' to make it.