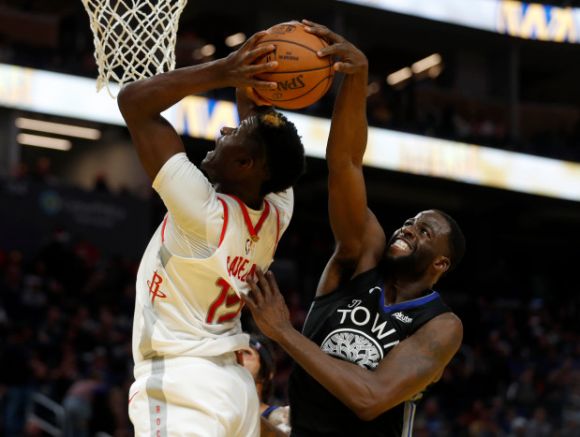 To repeat an old obviosity, that's why you play the game.

James Harden and the Rockets -- yes, Houston's now in Diana Ross & the Supremes mode, as opposed to The Supremes -- have just been whacked by the latest monkey wrench that may ultimately hinder their quest for the NBA title this time around.

The Golden State Warriors may have only been 7-24 coming into Christmas Day, but they still manage to cause headaches for Houston, just like they always have.

In years past, all the Dubs had to do was be themselves and leave the Rockets to their own flawed devices.

This time, it was different.

With both Steph Curry and Klay Thompson in deep storage, it's as close to a lost season as Golden State could have imagined. This doesn't mean Steve Kerr and Staff have kept their heads down, though. They're still good for an ambush or two.

Like their 116-104 way of saying Merry Christmas to heavily favored Houston.

Draymond Green was a big fan of Jarron Collins' defensive plan to double James Harden whenever he touched the ball.

Jarron Collins is responsible for the State's defensive schemes, and he gambled that Russell Westbrook couldn't do enough damage to make a difference.

Harden's numbers, meanwhile, were those of mere mortals. He was 'held' to 24:

Not to be lost in this upset is the play of Curry's bro-in-law, SG Damion Lee. He's on a two-way contract, but that'll surely change next season if he can log a few more outings like this one.

Dude was nails with an efficient 22-point evening, including a 10-10 performance from the line. That's part of a useful stint where he's averaging 14.6 points, 8.0 rebounds and 3.8 assists in 30.7 minutes.

They'll love him in Santa Cruz.

Kerr's already said he'll ride Lee hard and put him away wet. Then, it's on to another solution.

Meanwhile, the rest of the league surely took notice of how Golden State handled Harden, so it's on Mike D'Antoni to respond. Collectively, the rest of his team could only manage a 31% effort from the field, so they've got some stepping up to do.

Not to mention being sure to keep Harden healthy.