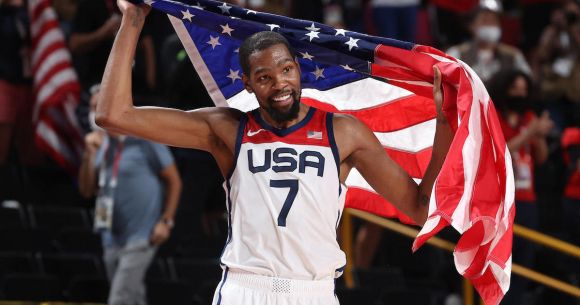 It's just the way pro sports does it:

This is not to say the French national team got creamed in the Tokyo Olympics' gold-medal game from men's basketball, because they didn't.

But there's no doubting that the USA gradually got their game together through the entire process and rolled for gold as a result.

Damn right, it does.

Gregg Popovich had the unenviable task of following Mike Krzyzewski as the coach of a national team that's expected to win every tournament it enters and usually only makes headlines when it doesn't. After all, that's why Coach K took the job in the first place.

There was no 'U' in Team USA in the three international seasons prior. The Americans rag-tagged their way to dull results, culminating in the lowlight of settling for bronze in the Athens Olympics. That was the first time a roster composed of NBA pros failed to win the gold.

Krzyzewski righted that ship in short order, returning the national program to perpetual prominence and keeping it there for the rest of his reign.

Popovich had the requisite résumé to pick up the gauntlet, but that didn't mean continuing the tradition would be easy. Turned out to be anything but.

🗣️ "I think I'm gonna play for the Tune squad this summer instead of the Olympics."

After his first-ever 1st round elimination, LeBron James has hinted he might not participate in the Tokyo Olympics 👀🤣https://t.co/SS8RQBICn1

Still, these are NBA players, and damn near any list of them were gonna face the pressure to claim top spot at the podium.

Especially with the first among equals -- Kevin Durant -- was lined up and ready for duty.

Dude lit the way for Team USA by lighting it up day after day.

Dude was a machine throughout the tournament.

There were supplemental scorers, of course, and the ultimate glue guy in Draymond Green, whose floor game was both opportune and virtually flawless.

In the grand scheme of things, it just took a while for everything to fall into place.

Admittedly, all this was a rough start.

Make no mistake, international hoops at the highest levels have closed the talent gap significantly, and after summarily disposing of pretenders lran and the Czech Republic, it showed.

Two down; one to go.

Being real, Durant's firepower was front and center yet again in the final, being as essential as it was all tourney long. Dude averaged 20.7 points per game and stepped it up to a 29-point performance in the French rematch. The key to their clinching gold, though, was a dogged defensive performance.

France kept it close with a strong effort by the Rudy Gobert, who if he woulda done better than 6-13 from the line, mighta led Les Bleus to their first-ever gold in hoops. However, full marks to the USA for forcing 18 turnovers.

Credit yet again goes to Popovich and his staff for their game prep and deployment.

Thus, the latest Team USA men's gold-medal steak has been extended to four.

So, after enduring all the slings and arrows leading up to this moment, Durant and Green took the occasion to uncork:

Nothing else to say, really. The two holdovers from the 2016 gold-winning roster in Rio de Janiero walked the walk yet again.

It was time to talk the talk. Especially those two.