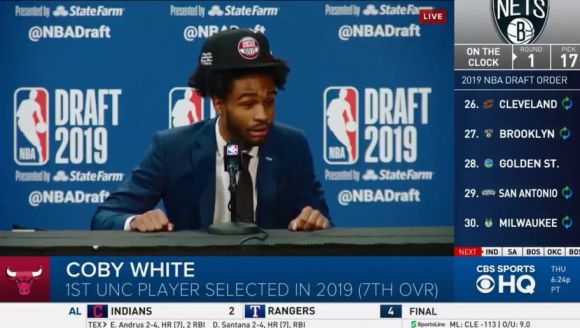 The 2019 NBA Draft seemed to feature more maneuvering and weird shit in general than the usual iteration.

There were several lottery teams that decided to ignore conventional wisdom with their picks, either because of shrewd player evaluation or just plain incompetence.

One of these teams would be the Phoenix Suns, who with sincere apologies to the Los Angeles Lakers and Washington Wizards, are quite possibly the most dysfunctional organization in the Association.

That crack staff in Phoenix selected forward Cam Johnson out of North Carolina, a pick that really took people by surprise, most notably his Tar Heels teammate Coby White.

Well, White was already pretty fired up about being taken seventh by the Bulls, but he just about lost his mind when informed of the Johnson gambit.

Coby White on his UNC teammate Cam Johnson getting drafted at No. 11: "Wow, bro. I'm getting chills!"

That was completely spontaneous and unscripted, which is why it's so damn good.

White's experiencing a variety of emotions here, but his initial reaction is one of shock, as in why the hell did Phoenix take my teammate with the 11th pick?

The shock is then joined by genuine happiness and glee:

Of course, the question as to why the Suns would trade back from the sixth spot to take a dude they could've likely gotten much later in the first round still lingers.

Also, they kinda needed a point guard, but to each their own.

Perhaps that unforgiving desert heat is screwing with the old synapses.

And while we're on the subject, here's some Coby White.

Let's just hope the Bulls don't screw him up too badly.