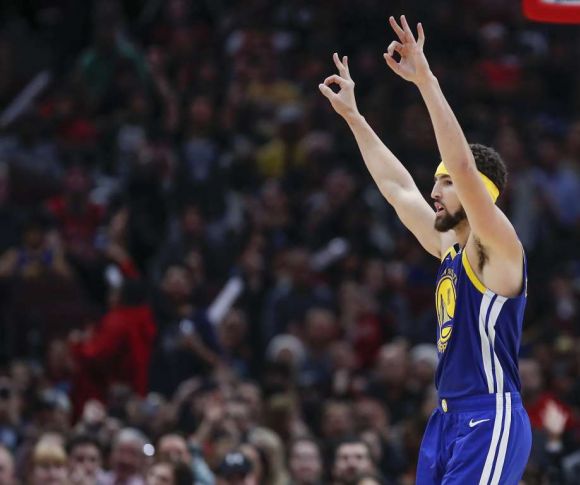 Sooner or later this season, the switch was gonna get flipped.

Who knew the Chicago Bulls would be the ones flipping it for him?

Full marks to Klay Thompson drilling 14 of his 24 howitzers, breaking teammate Stephen Curry's NBA mark and doing it in only 27 minutes.

But, damn! As loose as assists are dished in the league, the Bulls shoulda been credited with more than a few.

Of course, Thompson and Curry can light up the best of teams, but this one was damn near a shootaround.

The Dubs won, 149-124, which meant they didn't break a sweat in their end, either. The difference is they would've if it was necessary.

It wasn't, and the the result was a free-range former Washington State Cougar:

You're forgiven if you mistook that for a shootaround.

Entering this game, Thompson was a mere 5-36 from the suburbs, so dude was due.

According to NBA rules, this was an official game, so the record stands.

Thompson's totally capable of shattering it against a club that actually cares, so there's that. It'd just be more settling if an achievement if this magnitude took some sorta special effort or something.

That dudette will never be a Chicago Bull.