Published on 7-Jan-2014 by Bridgett Davis 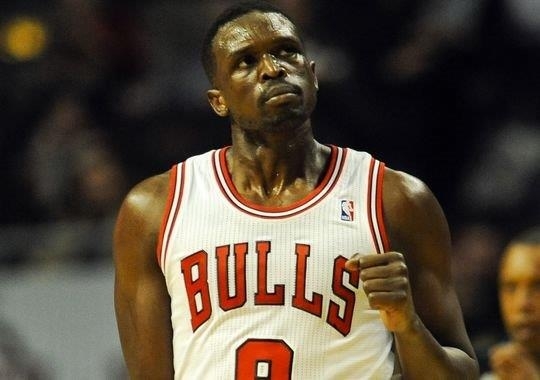 The Chicago Bulls shocked the NBA world when they traded two-time All-Star Luol Deng to the Cleveland Cavaliers.
The Bulls are making the near-term future their priority and are, in essence, ringing this year up as a developmental season. General manager Gar Forman is clearly leaving no doubt as to this intention.
The deal sees Cleveland sending balky center Andrew Bynum to the Windy City, where there is no chance he'll stay. Bynum has $6.5million left on his contract this season, but that money isn't guaranteed until the close of business Tuesday. Just know that sometime before the clock strikes midnight, Bynum will transform back into the pumpkin we all know he is and, with a waive of the wand, will disappear. Hopefully, forever.
There is a silver lining to this apparent dark cloud. Chicago got three future draft picks the in the deal, plus the right to swap first-rounders in 2015.
So what does all this mean for the Bulls?
Well, what it doesn’t mean is that the Bulls are going to dump their entire roster at any cost. But it does mean that if they can find a team willing to take Carlos Boozer, who is due $16.8million next year, they'll do it. But Jimmy Butler, Joakim Noah, and Taj Gibson are most likely off the table.
The overall goal is to reconstruct a team in an alacritous manner when Derrick Rose returns to health. That’s why the Bulls are trying to making sure they have the flexibility to make a move. They're making the books light; assuming they either get rid of Boozer or amnesty him, they'll have $48million of cap space to play around with in hopes of finding their missing puzzle piece.
So what do we learn in all of this?
The Bulls are making short-term adjustments. They're smart in that they're not going to tank, which doesn’t do much for morale. Instead of chasing windmills in hopes of a playoff spot where they'd likely be one-and-done, Chicago has decided to nurture the team they have.
Yes, the East isn’t exactly packed with talent this season, and they no doubt could have made a run, but Chicago doesn’t want to just cross the finish line, they want to end a campaign with trophy in hand. So they opted for the smart thing, ie- do what they can to stay competitive while still being able to prepare for the future.
For their sake, let’s just hope that future incudes Derrick Rose.
DAILY UPDATE