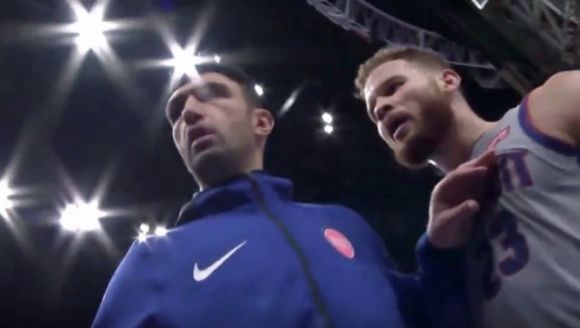 Blake Griffin is all about giving back to the fans.

Even the ones who taunt him mercilessly.

A few nights ago in Minnesota, Griffin and his Detroit Pistons paid a visit to the Timberwolves, whose fans were less than hospitable.

Well, one fan in particular.

Here's the encounter in question:

As is typically the case in these situations, the fan undoubtedly didn't want to dick with Blake Griffin, but it didn't stop him from providing constructive criticism of Griffin throughout the game.

Ultimately, this douchey fan was ejected from the premises, and in signature douche-like fashion, waved to the crowd as he departed.

The T-Wolves fandom was rewarded for their douchebaggery with a 129-123 OT loss, as the Pistons dropped 40 points in the fourth quarter to force the extra session.

Griffin is certainly not a stranger to this sort of fan interaction.

Back in his Clipper days, dude even provided refreshments for the people during games.

That's the type of progressive community outreach that makes the NBA so special.