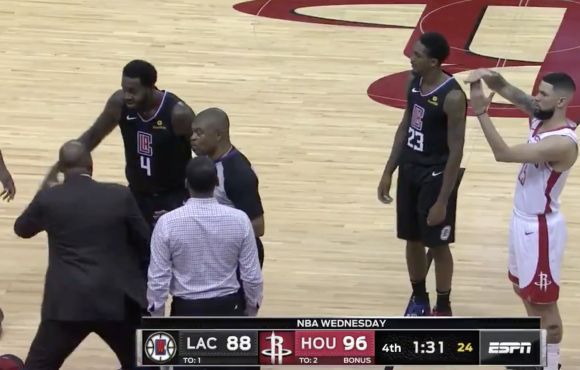 Even beyond the realm of professional sports, father-&-son relationships can be quite challenging.

With this in mind, we bring you the complicated dynamic between Austin and Doc Rivers, who have to navigate the NBA as immediate family.

Of course, Old Man Rivers used to coach his son with the Clippers, but Austin is now a member of the Western Conference rival Houston Rockets.

This brings us to a rather humorous situation that occurred a couple of nights ago in Houston.

Let's at least wait for the punchline.

Late in the Rockets' 102-93 win, a frustrated Doc was verbally sparring with one of the refs when the following happened:

Austin Rivers cheered for his dad, Doc Rivers, to get a technical foul. He got his wish. pic.twitter.com/A9zqcBL8gV

That kid sure knows how to work a crowd.

Obviously, family is an important part of our delicate human tapestry, but we're talking about a mid-November NBA regular season game.

Fortunately, the Rivers household seems to still be intact:

The Twitter horde had some observations on this fun little kerfuffle

Austin Rivers egging the crowd on as Doc gets ejected is a touching family moment.

Austin: Mom, can I go out.
Austin's mom: Sure, Hunny.
Austin: pic.twitter.com/XdIUUoAxz7

Austin Rivers showing up to thanksgiving dinner after getting Doc that tech pic.twitter.com/u3T4e3NltP

Hopefully, this situation can be resolved by Christmas.