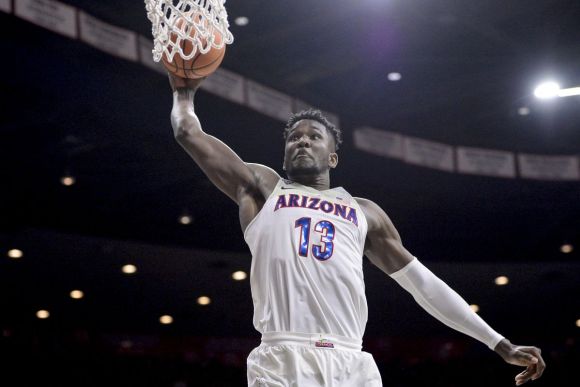 It's that time of year again when all four major North American sports pay mega-dosh to newbies for stuff they haven't done yet.

If anything came out of the NBA's coming out party -- and really, who's gonna know for the next few seasons? -- it's that a fair number of clubs know:

Take nothing away from Kevin Durant -- as if -- but it seems like a few teams were looking for centers who actually looked like centers.

Of course, few of those exist at the elite level anymore, but the Phoenix Suns found the obvious one:

Because there are season tickets to be sold, the Suns didn't wast any time getting the hype geared up.

Still, seems like there's a lot to hype in Ayton, including the proverbial chip-on-shoulder:

Speaking of Luka Dončić, the 19-year-old Slovenian -- 28 Feb 99 -- is clearly the most creative dude in the draft.

Spain's ACB is quality competition, especially for someone his age, and the fact he led them to the EuroLeague championship speaks volumes.

So do his highlights:

It's probably blasphemy, but Dončić may even be the most versatile dude in the draft.

That involves playing big when the occasion calls for it, most notably on defense, which is where nuts are really cut in the NBA.

Capable defense is more than second selection Marvin Bagley III can say, but hell, the Sacramento Kings are so wanting in every aspect of the game that dude checks enough boxes to ultimately improve them.

In the early going, there's only one reason why he'd play anywhere but inside.

If Marvel ever wants to do a bro version of the Fantastic Four, pencil Mohamed Bamba into the role of Reed Richards.

Sure, the dunk montages are nifty cool and all that, but Bamba could wind up being the ultimate rim protector and rebounder.

Dude's still gotta learn the difference between a block and a swat -- something Dončić has already figured out -- but he's got time.

Michigan State's Jaren Jackson Jr (to Memphis) and Duke's Wendell Carter Jr (to Chicago) round out the quintet of centers selected in the top ten.

The task now is learning all the position's tricks, from slides to the dark arts.

But please, stay away from the flops.

Just like the clubs that drafted them hope they have.