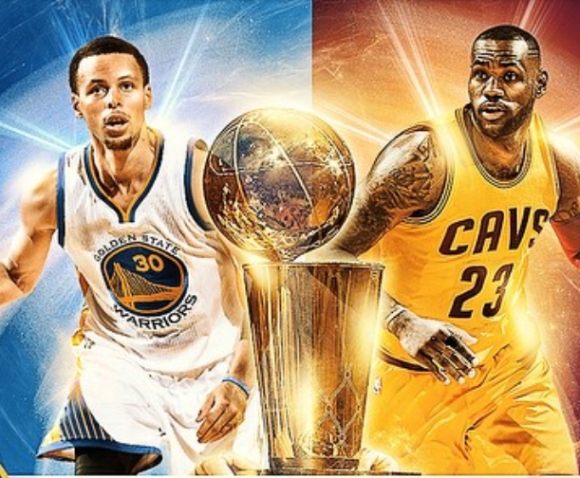 This entire NBA playoff thing is just like a WWE Royal Rumble.

And to be frank with each and every one of you, it's nothing but a waste of time.

The Cavs and the Warriors are in the middle of the ring, and each and every so-called playoff team from the Eastern and Western Conference get to make their way to the ring to get their shot at the title.

Problem is, it's all pre-determined!

No team has a snowball's chance to throw the Warriors or the Cavs over the top rope and win the Rumble.

I mean, the NBA title.

Both teams have cut through the competition -- or lack thereof -- like a hot knife through butter.

Both teams are resting right now, and for whom are they waiting? The Spurs and Rockets?

San Antonio may be one win away from meeting the Dubs, but really, they're done like dinner.

Their window has closed and will remain closed until they find some fresh help for one of the Top 5 players in the league: Kawhi Leonard. And now that he's hobbled, it seems like that's going to be too little, too late.

Meanwhile, the Rockets are still not that good. They have one exceptional player, and he either needs to shave or find a gardener. Come on, dude, how much fecal matter is in that thing?

So although this match-up is a tad bit interesting to watch, in the grand scheme of things, neither team is going to upset the Warriors.

In the East, Cleveland is wating to sweep the Celtics-Wizards winner.

Boston's best player is 5-8. Enough said; Bird and Parrish are not walking through the Garden doors anytime soon. Washington has a nice team, and John Wall is an All-Star! He has a solid squad around him, but solid is not great, and you need great players to win an NBA title.

Otherwise, it's just a matter of time before it all goes wrong.

Lets just fast forward and get the Finals started!

I want both teams at full power! With each meaningless play-off game that both teams have to endure while awaiting the obvious, the injury factor increases. Either team is a tweaked back, rolled ankle, broken finger, blown out knee, separated shoulder, or concussion away from not being at full strength!

How much would that stink?

The NBA playoffs are too long with waaayyy too many bad teams.

There's no reason to reward being average or below when it comes to professional sports. They line their pockets enough with merchandising, video rights, and so on without having to gouge fans for the inevitable failure awaiting them in the post-season.

Teams like Atlanta, Toronto, Portland and the Jazz  should all have had a good long rest at the end of the  season. It is, however, 2017, and we've got to reward mediocrity. Give yourself a participation trophy if you agree!

Stop wasting my time and risking injury to the star players on the two teams that have been pre-determined to play for another NBA title.

It's the Cavaliers and Warriors for the third year in a row. I want both teams well-rested and both teams with all players at 100%. May the best team win.

Hey, here's an idea: Why not just let  the Spurs/Rockets and Wizards/Celtics winners amuse themselves and play for third place!