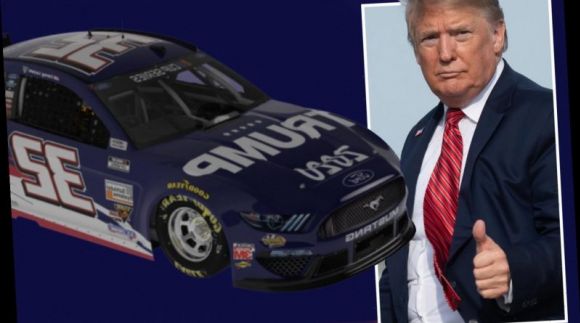 Like seemingly every single activity on this doomed planet, NASCAR has become heavily politicized recently.

Of course, there's the continuing saga involving Bubba Wallace and a Talladega garage pull rope that had mysteriously been fashioned into a noose.

Despite the fact that Wallace is one of the few black dudes hanging out at the track and the hate symbol was found in his garage, the subsequent FBI investigation determined that the act had been done months earlier and wasn't overtly racist.

Indeed, this type of logic is par for the course these days, so we'll table it for now.

Even before the above went down, the national discourse involving the Confederate flag obviously had to include NASCAR, as the damn thing is synonomous with the sport.

Recently, this partisan fun was in full bloom at the Brickyard 400, as the wildly progressive folks at Go Fas Racing partnered with something called Patriots of America to produce the following:

Yep, Bubba's BLM ride will apparently need to make some room on the track for this political endorsement on wheels.

However, the Cory Lajoie-driven pandermobile didn't fare well at all, exiting the race a mere 16 laps in:

It's a PILEUP on pit road at @IMS!

That twisted heap of red, white and blue is in there somewhere.

Hey, let's get a closer look:

The blinding irony of this situation wasn't lost on the cyber-masses:

Larry is blunt, but fair.

So a Trump super PAC sponsors a nascar driver in today’s race. The Trump car causes a wreck on pit road and runs over a pit crew guy....so 2020.

And one more visual just to drive our subtle point home:

By the way, not only did Bubba actually finish the race, he placed ninth.

Now we can only assume you're wondering if retired ballplayer Aubrey Huff has weighed in on the subject.

Well, we aims to please:

Oh, and what of the ratings for the Brickyard 400?

More details on 46% viewership gain for @NASCAR Brickyard 400 at @IMS on NBC.https://t.co/ytGOgocrqd pic.twitter.com/DunSHWVJma

Wait, there must be some mistake.

Has @BubbaWallace apologized to all of those great NASCAR drivers & officials who came to his aid, stood by his side, & were willing to sacrifice everything for him, only to find out that the whole thing was just another HOAX? That & Flag decision has caused lowest ratings EVER!