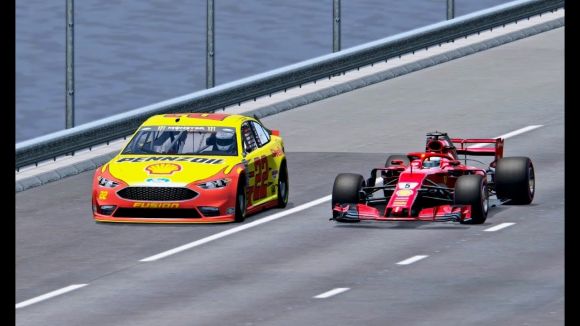 Extreme situations call for extreme measures, and those are often a result of outta-the-box thinking.

Covid-19 is definitely an extreme situation, and it may be that way for a while.

The sports world is doing its bit to adjust accordingly, just in case each league or tour has a season to resume later this year.

Baseball, for example, needs games -- lotsa games -- to make for a credible campaign, so it's considering loading a buncha double-headers into whatever schedule it'll have left. If so, MLB oughta dedicate 2020 to Ernie Banks.

The dudes at IndyCar and NASCAR are taking the cue.

Deploying the sorta creativity that actually did make America great, they're joining forces to stage a double-header of their own at the Indianapolis Motor Speedway on the Fourth of July:

NASCAR was already getting set for the road couse. Dudes liked what they saw, too:

Here's what a lap looks like from a driver's perspective:

Clearly, this sorta pairing has never happened before. The practice laps and time trials are obviously gonna be condensed, but under the circumstances, no one's complaining.

The most interesting part of it all will be in the stands. Each circuit has its own set of fans. Odds are this will be a golden opportunity for cross-promotion. The event will surely sell out because of its historic implications. The real story will be told as data gets crunched in the aftermath.

It's not often the legendary Indianapolis 500 gets upstaged, but since it was always looking grim for its traditional Memorial Day running, everyone knew it was likely to be rescheduled.

So, for the first time ever, the Greatest Spectacle in Racing will grace a different weekend, which in this case is centered around Sun 23 Aug.

Of course. 1918. That's when the Spanish flu pandemic broke out and, a year later, forced the Stanley Cup finals to be abandoned.

As we're seeing again, pandemics have a way of doing that.

IndyCar and NASCAR have found an excitingly clever way to navigate through it. We can but hope Covid-19 cooperates.