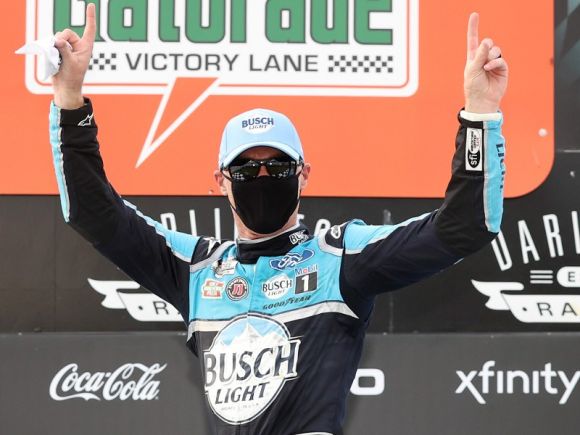 Maybe it's because the race itself generates enough sound on its own, but the resumption of NASCAR's 2020 season probably felt as normal as sports fans are gonna have it in these uneasy times of coping with Covid-19.

They sure feel normal for Kevin Harvick right now, after picking up his second career victory at the Darlington Raceway in the Real Heroes 400.

Dude was no doubt so pleased about picking off a victory in the first week of resumed racing that he musta felt ... well ...

This was a cool race to win, as NASCAR dedicated it to the frontliners doing what they can -- and more -- to keep stricken victims alive during the pandemic.

The race was run under circumstances sports fans have come to expect:

Harvick came into the race as NASCAR's points leader before Covid-19 threw a monkey wrench into the works, and accordingly, he spent his entire day at the front of the pack that became a two-second lead over Alex Bowman at the finish.

Dude took the lead for good in Lap 216 -- of the race's 293 -- and had no problems staying ahead of Bowman after a late restart following a decidedly less dramatic mishap by Ryan Newman than his short-range flight at Daytona.

Harvick now has a 28-points lead over Bowman after this victory, which extends his streak of claiming at least one win per campaign to 11 straight seasons.

When he took Darlington in 2014, dude went on to win the series championship. In this year's truncated schedule, this sorta start gives him a solid chance to do make history repeat.

The 50th victory ties Harvick with Hall of Famers Junior Johnson and Ned Jarrett, an indication as to where his ultimate winner's circle is gonna be. Even if he is only three inches tall.