Published on 5-May-2020 by J Square Humboldt 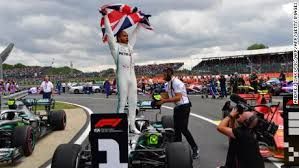 F1 just wants to make sure there is a British Grand Prix at Silverstone this year.

It's announced plans to proceed with a target date of Sun 19 Jul behind closed doors, subject to government approval. Given what happened after Cheltenham in late March and the fact that Covid-19 is still running rampant in the United Kingdom, this still isn't assured.

F1 confimed the obviosity yesterday that the French Grand Prix had been cancelled -- President Emmanuel Macron had already put the kibosh on all public events until the end of July -- so right now, the plan is to begin its belated season on Sun 5 Jul in Austria, with second race there a week later.

They'll do a doubleheader at Silverstone -- possibly with the second race a day later -- for two reasons:

It's just recently coming to light that Silverstone has been badly in arrears with its fees to F1 to the point that what it owed for the 2019 British Grand Prix was only paid off this past March. The trouble came from the cost of building their new pit and paddock complex back in 2011.

Because F1 considers it imperative that one of its most popular races be held this year -- and one more the week after -- it's waiving the usual host fees that, in essence means it's renting the track for two events.

Lewis Hamilton won't mind, at all.

Dude's won six of the eight events he's run at Silverstone on the F1 circuit.

F1 does well with its broadcast and sponsorship revenue streams. In-event cash flow is just as huge, especially at a mega-crowd venue like Silverstone.

In fact, F1 races are far and away the biggest ATM in global sports, raking in up to ten times more dosh -- roughly $240million per race -- than any Premiership or NFL event.

Hosting fees are another one of its main income sources, so it'll be taking a huge hit here. It comes after the circuit actually allowed itself a profit last season, so it can afford to be generous to the likes of Silverstone and probably a few other venues on their calendar.

Speaking of financial hits, a number of teams are feeling the squeeze because of the pandemic. F1 had been considering a budget cap to even the playing field for teams not named Ferrari or Red Bull, and now they're prepared to act on it.

The levels they're likely to announce look like they'll greatly annoy Ferrari and Red Bull. They're making esoteric arguments that a ceiling of $145million is just too inadequate for technical and status reasons, but they don't have the more existential issues of feeding the other teams' bulldogs.

Estimates are F1's gonna need to check around 1000 people per event. It wants to be careful not to impose on test kit suppliers serving the medical community, which will likely add a premium to their overhead. Still, it is the right thing for a kajillion-dollar enterprise to do.

They just need to stage races to do it. They've done the math and made the deals, so all they need now is a green flag or two.