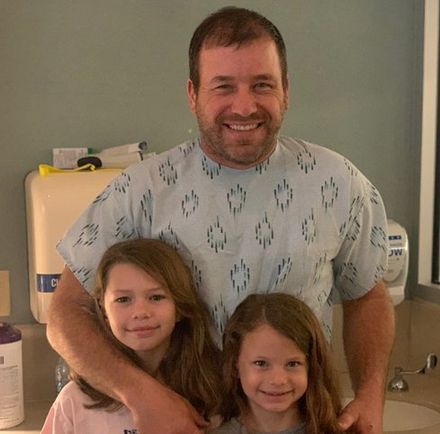 Just a couple of days ago, racing fans and the rest of humanity was wondering if Ryan Newman would make it long enough to receive last rites after one of the most spectacular crashes in Daytona 500 history.

Now, dude's walking -- walking -- through the hospital doors with his daughters as if he just got treated for ...

Actually, it doesn't look like he was treated for anything.

Details of his medical condition haven't been released, but it'll be news if a call to 1-800-FAITHHEALER isn't in there somewhere.

At least until some wacko conspiracy theorist infects social media with a scenario that it was Newman's stunt double in the ride of his life ...

... and he was hidden behind the black screen until he could bolt into the ambulance and be spirited outta the speedway, Newman looks to be in better shape than everyone the morning after they celebrated laying a play on Denny Hamlin to win.

Roush Racing is stating the obvious when they say Newman won't be in Car No 6 when the tour hits Las Vegas this weekend.

However, no one's ruling out the possibility he'll be back in action sooner rather than later.

Full marks, too, go to the medical staff. They were probably braced for performing a full body transplant when Newman arrived. However or whatever, everyone wound up being all smiles afterward:

Ryan Newman and his daughters pose with some of the @HalifaxHealth staff that took care of him after a terrifying Daytona 500 crash. He was released from the hospital today: https://t.co/esfEFXQCjS pic.twitter.com/CLamQFJXDF

Technology and medical science definitely did their jobs, but above all, the moral of this story is the human body is an amazing thing.