Zimmerman Walks Off to a Choco-Shower 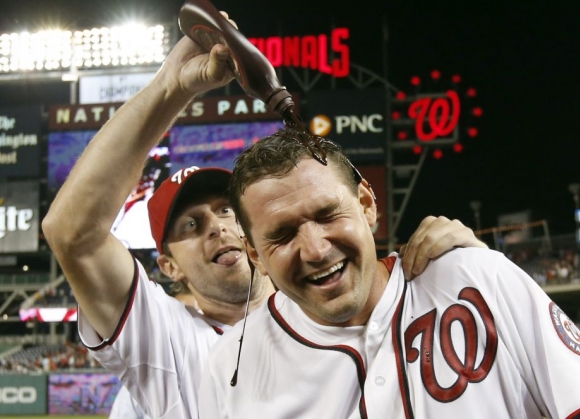 As the New York Yankees begin to cool off from their AL East-leading tear, the Washington Nationals are heating up and taking over the NL East.

In fact, with the Nats' 8-6 win over the Yankees in 10 innings last night, they've now tied the Mets for first place in the NL East, while the Yanks slid into a tie for top in the AL East with Tampa Bay's Rays.

The Yankees and Nationals have certainly shown two different sides to their clubs this season.

The Bombers, who have been without October baseball for two straight years, got some serious traction in mid-April and began to dominate the AL East. In the last couple weeks though, their offense hasn't caught up. Winning only three of their last 10 games, they're barely clinging to the top of the division as the end of May approaches. Brett Gardner even opted to shave his mustache. Superstition is a powerful force in baseball.

The Nationals, on the other hand, were favored to dominate the NL East, and the whole NL for that matter. With a rotation full of aces and a powerful line up, they somehow only managed to make it through April with a .425 winning percentage. It seems the tides are changing now, since they only have four losses this deep into May.

Until Zimmerman's pole pinger, Andrew Miller had a 0.00 ERA on the season as the Yankees closer. A stat like that only lasts for so long, though. And after the ball said so long, so did the clean sheet.

After taking his spot as the Nats' hero of the night, Zimmerman -- that's German for carpenter, incidentally -- was greeted with a shower of chocolate syrup.

And in Germany, that'd just be kinky.

The Yanks and Nats will face off again in the second of their two-game interleague set tonight, both tied for the lead in their division.