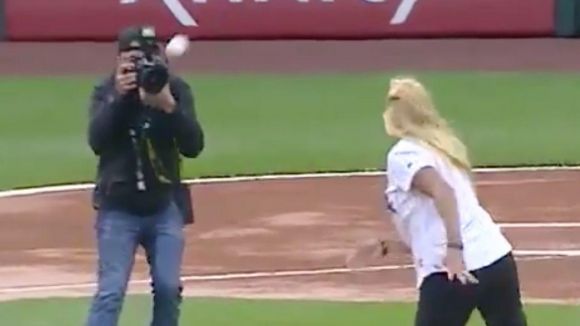 However, there's one tradition in particular that consistently brings us joy.

This would be the ceremonial first pitch, which is almost always awkward but rarely disappointing.

Much to our infinite delight, we were reminded of this fact before the recent continuation of the blood feud between the White Sox and Royals at the unfortunately named Guaranteed Rate Field in Chicago.

The big fun is usually provided by celebrities of varying popularity or athletes from other sports -- many of whom have absolutely no business being anywhere near a pitching mound -- but this gem was produced by a mere civilian.

For whatever reason, the White Sox organization decided that their employee of the month should toss out the first pitch, apparently without asking her if she could even identify a baseball, let alone throw one.

Please avert your eyes, if necessary:

Mother of God, that was mortifying.

That confused photographer would certainly agree.

Happy to report that both myself and the camera are okay 👌📸 https://t.co/Pu04xYY7Z8

Sadly, this is the image that dude will likely be describing to a therapist soon.

Of course, he's not the first photographer to fall victim to an errant toss.

This is still my favorite pic.twitter.com/tOl0uXBieD

These dudes should receive combat pay.