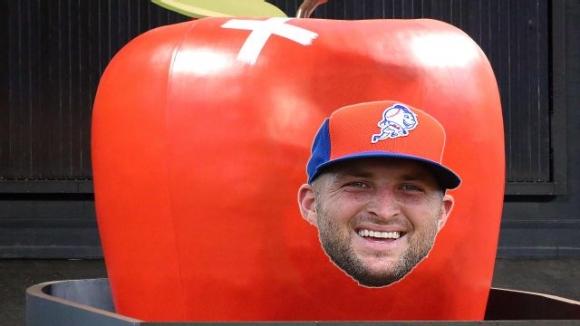 Dreams of young boys across the land often start with a shot at the big leagues, and it's obviously no different for former NFL QB Tim Tebow.

You remember him, right?

Dude announced last month he'd be holding a workout for all 30 MLB teams in hopes that somebody out there would discover him and give him a chance at big league dreams.

It turned out better than expected.

Tebow actually received a contract from the New York Mets. Who woulda thunk it even remotely possible?

Of all things, his dream played out in storybook fashion last week, playing center field for the Port S. Lucie Mets in the instructional league. Dude went yard in his first at bat since his prep days in 2005:

As you can surmise from that footage, it was a minor media event. That'll teach 'em. Don't turn your back on Tebow!

The comparisons to Bo Jackson and Deion Sanders were immediate, but let's not get too excited, here. It was the instructional league, after all.

Maybe DJ Dozier is a better comparison, or even Chad Hutchinson, who actually played QB for the Cowboys not too long ago.

Tebow is making the most of his opportunity to not only shine on the diamond but to stay true to his biblical roots.

Just a couple days ago, he was plunked in the ribs and charged the mound to offer the pitcher forgiveness.

If Tebow does make it to the show at some point, the Big Apple will go crazy with Tebowmania, and the art of Tebowing will surely make a furious comeback.

And who knows? Dude just got the call to the Arizona Fall League, where MLB's top prospects are assigned to accelerate their skills.

That's a big deal. Here's an overview of the program -- ironically posted by the Yankees -- from 2013:

Unfortunately, they didn't have to follow a few of them very far.

As you can surmise from those peachfuzzy faces, Tebow -- at 29 -- may have the other players calling him OG.

Will Tebow boycott games that are played there, similar to Sandy Koufax sitting out games on Yom Kippur? Mets fans, and upper management, will be watching with bated breath.

Naaah. Dude's on a mission. So many to convert, so little time. The rest of the world will surely be inundated with articles and social media posts broaching the topic.

Maybe, just maybe, if The Daily Player readers are lucky, you'll get treated to another article or two touching on this sensitive topic of a man's lifelong dream and in-your-face evangelism.

Wonder how Tebow felt playing on any given Sunday in the No Fun League?

The Jets are wondering the same thing.