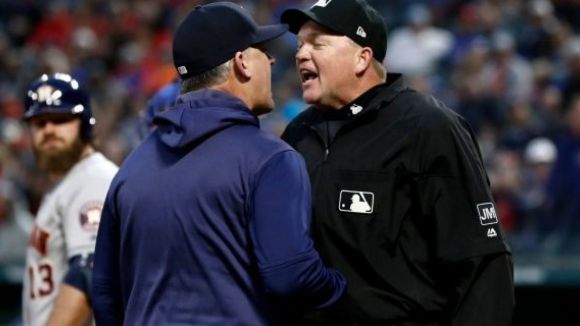 Ideally, a good umpire does his job competently while not making a spectacle of himself.

The unreasonable manchild made a complete ass of himself in Arlington the other night, literally harassing players and coaches while ejecting people with the predictability of an involuntary spasm.

The visiting Houston Astros were the focus of Kulpa's madness, specifically manager AJ Hinch, who has recent experience dealing with impulsive umpires.

Hinch may actually be shellshocked at this point, because we've somehow found an umpire more ridiculous than Ángel Hernández.

Let's have a look at the petulant Kulpa in action:

Someone needs their blankie.

This all began with Kulpa squeezing Houston starter Gerrit Cole, followed by a little barking from the Astros' dugout.

But instead of de-escalating the situation, this maniac turned it into a thing, literally staring into the dugout until Hinch was forced to ask Kulpa to focus on the game.

Of course, the 43-year old infant doesn't like to be told what to do, actually telling the befuddled Hinch that he can do anything he wants.

After poor AJ and hitting coach Alex Cintrón were both ejected, Kulpa continued screwing with Cole and the rest of the Astros, for whatever reason.

Dude's the absolute worst kind of umpire, one who doesn't seem to understand that there's literally not one single person in the park there to see him call balls and strikes.

Hinch has spoken with MLB big cheese Joe Torre regarding the incident, which should absolutely end with disciplinary action against Kulpa.

There should be a support group for these dudes, a safe place to talk about Kulpa and their feelings.