Published on 4-Jul-2019 by Alan Adamsson 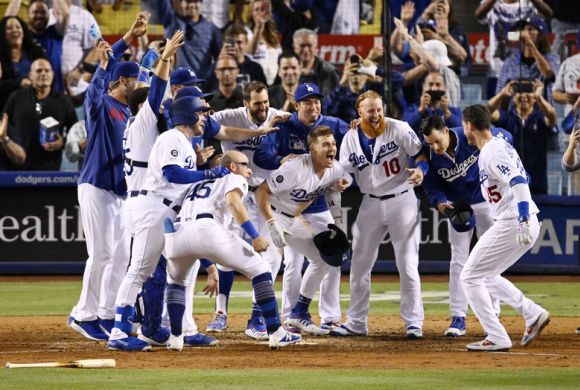 Somewhere down the line, if this season's edition of the Los Angeles Dodgers ever wants to hold a reunion, there's only one place to do it:

They've already been there as a group so damn often already, all they're missing is the caterers.

The seamheads who track such things haven't checked in with any other instance of what just happened happening. Two teams have been eclipsed, though:

So for now, the Dodgers lead baseball history in most consecutive walkoff wins at home with five.

Just like the number of consecutive walks Arizona Diamondback pitchers gifted them to make it happen:

If anybody's never come back from refusing a qualified offer, missing spring training, and signing after the season started, it's Greg Holland.

Maybe there is something to that where you are is as important as what you are argument.

Holland wasn't the only Snake slinger to fall prey to the Bums' last inning heroics.

The night before, Cody Bellinger warmed up with a bomb in the second inning before sending LA fans home happy in the 10th:

Passing Duke Snider and Gil Hodges for going bridge the most times before the All-Star break had to be cool for the dude who's outdoing Mike Trout this season.

There's absolutely no doubt the Dodgers did well in stocking their system, but they don't have to look to far -- as in a couple of hours down the I-5 -- to see who's loading up to challenge them.

But that's for another day. Right now, it's the Bums who're loading up ... on being the answers to what should be a couple of late-round, high-stakes trivia questions a few years from now.