Published on 8-Apr-2017 by Alan Adamsson 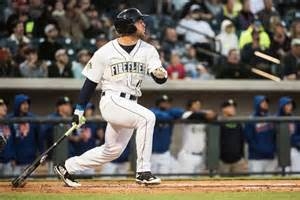 Do you believe in minor miracles?

Then Tim Tebow is here yet again to reinforce your faith in a baseball sorta way.

Dude has a knack for finding an acorn when wags least expect it, so why wouldn't he rise to the occasion in his first time at the plate for the New York Mets' Class A Columbia Fireflies?

The ball bounced back into the yard, so Tebow wasn't certain until the second-base umpire ring-a-ding-dinged his index finger:

Fortunately, Tebow didn't need a road map to complete the round-tripper, although his spring training performance might indicate otherwise.

Again, dude was taking notes in I-ball. Remember his first at-bat there?

Give the Mets credit. This stroke of public-pandering genius has surely repaid their $100,000 investment in America's second-most fascinating train wreck many times over.

The merch revenues have gotta keep those cash registers singing.

The Fireflies alone must be pinching themselves at the windfall that can come with hosting a celebrity.

Full marks to them. Minor league baseball is cool enough as it is, but that biz still needs every break it can get.

Not to mention insurance waivers.

Sometimes, quick dingers can have a detrimental effect. Batters get too eager to hit them again immediately afterward and screw up their swings as a result.

Since Tebow's reversion to a dry well was merely a return to his norm -- he ofer'd the rest of the night -- it's too early to say if he could have possibly messed up his mechanics any more than they already are.

But like any other trainwreck, it's hard to not keep watching.