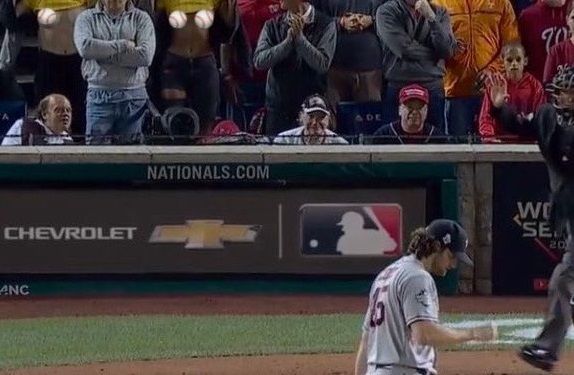 Apparently, the MLB marketing campaign that implores us to Let the Kids Play is just shameful propaganda.

Because if they really meant it, then the God-fearing young ladies who exposed their breasts behind home plate during Game 5 of the World Series in DC would be welcomed back to the ballpark with open arms and possibly a hose.

Instead, the dudettes have received a lifetime ban from the crotchety old men who run professional baseball.

Here is the stuffy disciplinary letter sent to one of the participants:

Two models have been banned indefinitely from attending any MLB games after flashing Astros pitcher, Gerrit Cole during the World Series. The women argue that it’s a double standard and that men who have lost their tops generally face ZERO punishment.

🗣What do you think? pic.twitter.com/lt4un02Cf4

Yeah, we should definitely listen to Instagram model Lauren Summer and her cogent point about double standards and gender politics.

See, no repercussions for Frank Reynolds.

“Baseball is boring,” they said. pic.twitter.com/kF2VB7lKXf

Summer and her top-heavy cohort Julia Rose were simply taking in some post-season baseball while trying to promote the delightfully named ShagMag, which is something America needs to get behind immediately.

Sadly, MLB doesn't seem overly concerned about losing the critical 18-24 year old female Instagram model demographic, a group that we all know is vital to the continued prosperity of the game.

Meanwhile, they keep letting people like this into the ballpark:

Trump was booed by a stadium full of baseball fans at Sunday night’s World Series game in D.C. pic.twitter.com/6KIZRV0Odj

We want the girls back.