Recycled Slugger Aristides Aquino Is on an Epic Homer Binge 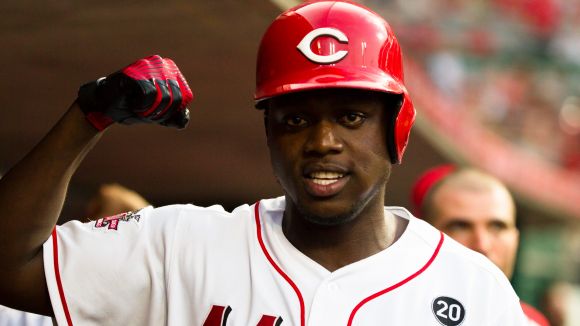 This foul Year of our Lord 2019 will forever be remembered as the season of the homer, as ballparks from coast to coast continue to regurgitate baseballs at a disturbing rate.

Team and league home run records are being obliterated at such a pace that an asterisk may soon be required.

In this climate, it might be easy to become jaded to the long ball, but we can still appreciate how Aristides Aquino is treating baseballs in his second shot with the big club.

Dude was actually non-tendered by Cincinnati but accepted a minor-league deal with the Reds because he wanted to prove himself to them.

Not only did Aristides re-tool his swing in the minors, he perfected the patented Punisher Flex to go with it.

Dude was ready this time around.

So when he got called up after the trade of Yasiel Puig, he's made himself known ever since.

Well, Aquino went yard just the other night against the Marlins.

That ball was pulverized.

On a more depressing note, there appeared to be maybe a couple hundred people in the ballpark, as the Marlins continue to have good seats available right up to and through game time.

Anyway, this homer was significant because of the following:

You may have noticed that this list isn't exactly a murderer's row, but Aquino just might have more staying power than those other cats.

Hell, dude already has a dinger hat trick game under his belt:

That's precisely why they call him The Punisher.