Brews' Jeremy Jeffress Was Almost Decapitated by a Hot Liner 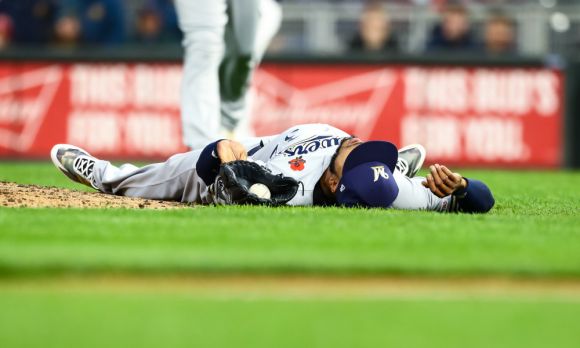 When compared to frequently brutal team sports like football and hockey, a game like baseball can seem almost tranquil and serene by comparison.

While there's certainly plenty of truth in this perception, baseball can often become absolutely terrifying.

You know, like when a pitch delivered at around 95mph is returned at a much faster rate of speed back to the pitcher standing perilously close on the mound.

It's in these moments when baseball is the most dangerous sport on the planet.

Actually, that's not the correct footage, although those proportions are right on the money.

Wait, here it is:

If anyone just soiled themselves, it's perfectly understandable.

This could've been much worse, a fact Jeffress seemed to grasp as he sprawled out in front of the mound contemplating the mysteries of life and death.

The insane catch ended the inning and might've saved a run against the Minnesota Twins in a game the Crew eventually won, but compassionate Brewers skipper Craig Counsell decided that his brave middle reliever should probably call it an evening.

This isn't the first time we've bore witness to Matrix-like maneuvers in an MLB game this season, although Collin McHugh didn't actually catch his brush with death.

Instead of being morbid and showing you pitchers actually being struck with line drives, let's check out some of the more reflexive mound grabs:

So again, while a sport like football is clearly more violent by nature, baseball can bring the peril as well.

That's still funny as hell, though.