Collin McHugh and the Immutable Laws of Mound Physics 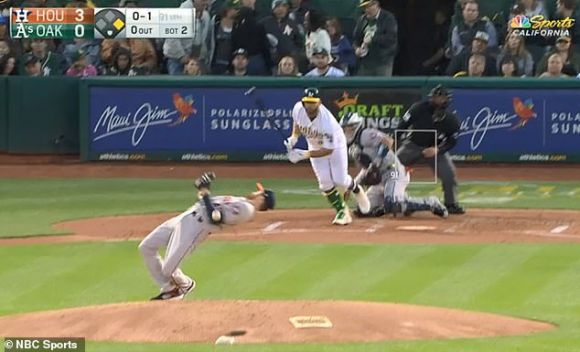 Pitchers are in a highly vulnerable position immediately after releasing a baseball from the mound.

They throw pitch after pitch burdened by the knowledge that the very next one may be propelled back towards their head at top speed.

A dude by the name of Collin McHugh found himself in such a position recently against the Oakland Athletics.

Fortunately for the Houston Astros' starter-turned-reliever-turned-starter-again, he's apparently able to bend both time and space on the mound.

No way that just happened.

Yes, it did bear a striking resemblance to a certain film entitled The Matrix.

No, Neo. I'm trying to tell you that when you're ready, you won't have to.#TakeItBack pic.twitter.com/JFOAcFYuCP

Morpheus was right, Collin McHugh is the one. https://t.co/bzCZG8mwq2

Human beings simply shouldn't be able to do such things, but we must believe what we see with our own eyes.

And because the alternative would've involved a baseball being lodged in McHugh's ear, we'll count this as a win.

We're fairly certain that the Wachowski Brothers and Keanu Reeves didn't have baseball in mind when they shot the following scene, but you never know.

Or the director of Deuce Bigalow: Male Gigolo.

Maybe next time he can catch the ball in his teeth.

Now that would be impressive.