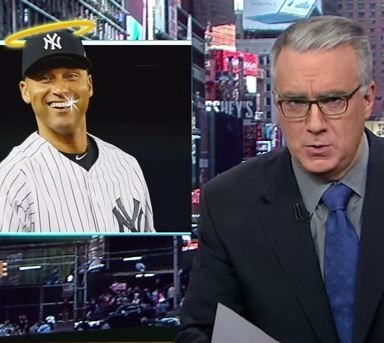 I've never been a New York Yankees fan. I respect the Yankees but never was a fan.

But I am a fan of Derek Jeter. I respect the man and the player.

So when ESPN's Keith Olbermann went off on him, I had to scratch my head.

Olbermann, who likes to yell and scream about the deadbeats in sports, basically believes fans shouldn't make a big deal out of honoring him.

Here's the same guy who's been ranting about the NFL for weeks, ripping one of the good guys for our hero worship and slamming him for not being the greatest Yankee of all-time.

Who says he was? With all that's going on in the world, it's refreshing to see a guy being honored for his hard work on and off the field. You never heard a bad thing about the guy. Hell, even when he broke up with his girlfriends, he sent them parting gifts. And Olbermann has a problem with this?

As far as his play, Jeter is one of the top shortstops of all time. His numbers bear that out. No, he wasn't a big home run hitter, but this guy's a lifetime .309 hitter, a 14-time All-Star, five-time Gold Glove winner, and a five-time champion. And he shouldn't be honored?

Shut up, Keith! The respect I had for Olbermann has gone out the window. This is same man, as I recall, didn't think Major League Baseball should retire Jackie Robinson's number around the league a few years ago. Now this.

Makes me question Olbermann's sincerity about anything he says other than to get ratings. Maybe Olbermann needs to give himself his own award for Worst Person of the Week.