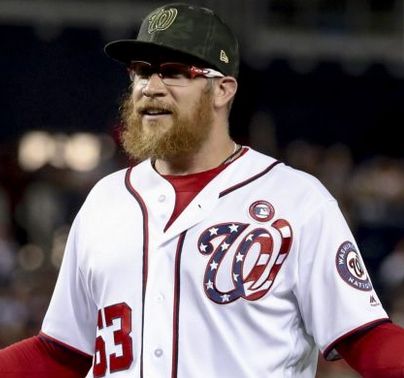 It's long past time that things need to be said.

And World Series Champion Washington Nationals' reliever Sean Doolittle figured he was as good as any to say them.

In fact, he's said a hella lotta things that need to be said.

Not that dude's been a voice in the wilderness or anything, but he's one who's put it in terms that frames the situation perfectly.

And what should anyone call a nation that frames a world pandemic in political and/or economic terms instead of medical terms?

One that can't approach a common enemy as one united force?

One that goes full dyslexic on the L.

As MLB joins every other sport in trying to salvage something out of the 2020 season, the more Covid-19 reminds everyone who's who in the zoo, the more a cold realization of hard reality makes itself evident.

This virus really is no joke. It doesn't just kill indiscriminately. It leaves others with debilitating ailments. And even the garden variety can lay the best bodies low. Ask Freddy Freeman.

Putting it mildly, then, any effort to tame it is gonna take a coordinated effort over a painful period of time that the USA has yet to prove it's got the discipline to handle.

That's how Doolittle framed it.

Pro sports is one of society's luxuries, and if we want to partake of it, we have to earn it.

MLB and the NFL opted to forego the bubble concept, figuring the players would be safer in the comfort of their own homes. At least, when they're home. On the road, discipline's gonna be huge.

So are the logistics. As actual games are getting close to being played in circumstances like damn near no one in North America has ever seen, Doolittle again speaks truth to reality:

But we need help to make this work. Faster test results, PPE for high risk individuals and players/staff with high risk family members. The individual efforts have been great so far but we can’t rely solely on individuals. The efforts have to be structural as well.

And there's one metaphorical city they've gotta avoid, one with a rather sobering population: Covid City suffers a loss of life equivalent to an 11 Sep 2001 disaster every three days and has been for four months and counting.

How low has the country fallen in relation to other countries, virtually all of whom have pulled in the same direction to mitigate the pandemic?

The NHL had planned to have one of its hubs in America. Now with the virus surging everywhere -- and it's still the first wave -- the puckers pulled up stakes and announced Canada would host them both. It's done a far more efficient job of keeping the virus in check.

Someone needs to lead the USA outta this ugly slump.

It's clear no one's stepping up in another part of Washington, so the eloquent Doolittle has taken the mantel whether he thinks he has or not.

Well, him and his fellow pros.

If any good can come from pro sports trying to make a go of it in these tragic times, it'll be from one of the nation's most disciplined work forces. If only they can stick to it when they're not on the field.

And if their support system holds. Tall order.