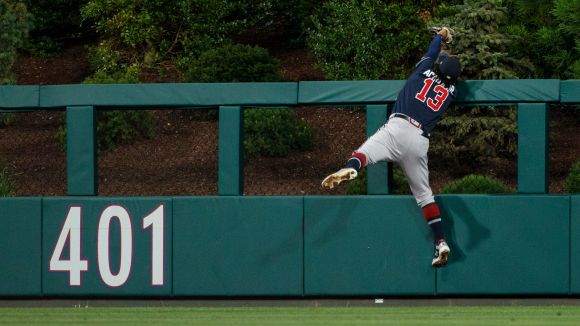 There are some ballplayers who just have a certain intangible quality that makes them noticeably special.

Ronald Ocuna Jr would be one such player.

But even ridiculously talented people occasionally fail, which only serves to make them more interesting.

The Atlanta Braves' stud center fielder experienced one of these humbling moments last night in Philly, and it was spectacular.

It may be September, but it’s STILL a Scott boy summer! #RingTheBell pic.twitter.com/vhHnscHLMH

We're still not quite sure if this was a trick or an illusion, but it was entertaining nonetheless.

That was one of the best catches of the year right up until the second it popped out of his glove.

You could even see Ocuna beginning to celebrate as he was pulling the ball down.

Alas, it was premature.

Fortunately for Ocuna and the Braves, they lost, 6-5, to the Phillies, so the little gaffe didn't make much difference.

If only Ronald hadn't spend so much time dicking around with the Phillie Phanatic before the game instead of getting in some prep work.

The Phanatic had to earn his ATV keys back the hard way. 😂 pic.twitter.com/5KSHPJXpk2

There's a free lesson for the kids.