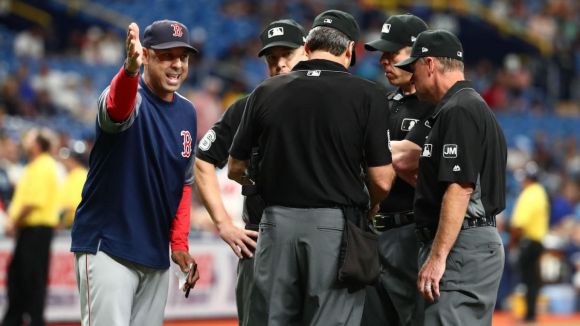 Can't take your eyes off them for a second.

The Rays will never be confused with a big-bucks organization, but their big-brain approach to being competitive is something to be admired.

They're relentless at it.

Their conniving continued against the bamboozled Boston Red Sox, managing to put a pair of pitchers on the field at the same time.

Why it took plate umpire Ángel Hernández half the afternoon to figure it all out is anyone's guess.

tfw you need explain the Rays play in St. Petersburg, not Tampa pic.twitter.com/3cqs2G3mqR

In the cold light of harsh reality, the situation wasn't all that tough.

It's not like players haven't seen this from munchkin ball all the way through college:

This is simply another example of the Rays doing what they do to keep themselves in ballgame and the playoff race itself.

Let this be one of the rare occasions when we come to Hernández's defense, although limply:

From pool reporter: Angel Hernandez said that Cash never specified where Kolarek would hit when moved to first base. He said there is rule that states in such a case it is umpire's discretion to place hitter in spot in lineup.

Not sure if all this had any real effect on the result, although Chaos Theory may beg to differ.

Once again, sports has explained life.

Thank you, Rays, for once again showing us order outta chaos.