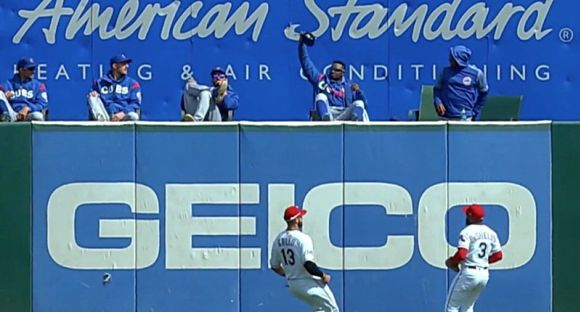 The Texas Rangers team against whom they bafflingly dropped two of three is probably going to lose 100 games this year, so this is certainly a proud moment for the Cubs and their families.

However, one net positive did emerge from this weekend tire fire.

Gloves are so last season.

Indeed, that Kyle Schwarber rocket was caught in the hat of his teammate Randy Rosario with minimum effort and almost complete indifference, as that casual bullpen scene resembled a luxury day spa.

The Cubs weren't awarded any extra runs for the meaningless play, but it was still extremely righteous.

Unfortunately, the same can't be said for pretty much every single Cubs reliever, as they ironically provided very little relief against the Rangers.

Somehow, it got worse on Sunday for the Cubbies, with the bullpen allowing six more runs in an 11-10 defeat.

The Cubs bullpen may not be able to get anyone out at the moment, but they sure know how to have a good time.