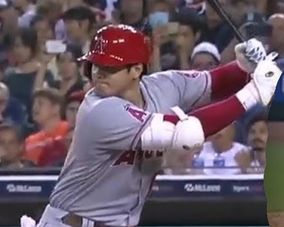 It's not like this hasn't been done before, because it has.

It's just that it's being done now.

Since the DH came to MLB in 1973, three other slingers have had games where they went yard as well as eight innings:

What's so different, then, when Shohei Ohtani does it?

Ohtani does stuff that others have done and then takes it a level higher.

The Detroit Tigers just got a first-hand glimpse of this while he joined the same exclusive club as Witt, Benson, and Garland on the way to keying the Los Angeles Angels to a 3-1 triumph, needing only 90 pitches -- 69 of which were strikes -- to get 24 outs:

This is a feat Babe Ruth did a grand total of one time.

It happened to be his first major league dinger, in fact. Soon thereafter, the Boston Red Sox wanted to see more of that and, ultimately, so did the New York Yankees. Ruth's career was thus positionally transitional.

Ohtani is a hybrid.

Manager Joe Maddon wisely keeps him as a DH -- a decision made easier with Jared Walsh at 1B -- but dude still needs to prepare for both roles as a hitter and a hurler. In this day and digital age, that's a schedule that's beyond full.

Speaking of stepping it up to the next level, when he's not going bridge or toeing the rubber, dude's one of the fastest players in The Show, too.

OK, not that fast, but still pretty damn fast:

Wes Ferrell holds the all-time record for bombs by a pitcher, with 37. To be considered in this category, Ohtani would obviously have to only count the round-trippers he racks up during mound duty. The Halos see him as a pitcher first, so who knows?

If he ever does put down the bat between starts, he'll have four days of rest to take a run at ol' Wes.

It'd give him time to set records elsewhere ...

Given the Angels' arson squad in the bullpen, they'd probably invite him to try something like that. They sure aren't focusing on honing their skills.

And for now, whenever Ohtani's pitching, they have the time themselves to do whatever it is they do out there.

Except for 4-5 times in a normal game. Dudes can be on alert to shag one of his no-doubters.