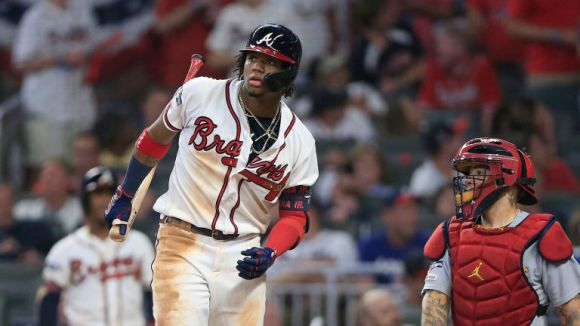 The Atlanta Braves' phenom Ronald Acuña Jr is a lot of things.

That's wonderful. However, one thing the club's not paying dude to do is be a spectator.

Especially when he's just hit a baseball hard and far.

And more especially, when this is the second time in less than two months Acuña hasn't learned his lesson about going all out when the time comes to go all out.

Ronald Acuña Jr. has been taken out of the biggest game yet for watching a potential HR turned single. This will be a GOOD LESSON for a young player with TONS of talent. Snitker Cares about Ñ, THE TEAM & sends a message to everyone about playing the game the right way. #ChopOn pic.twitter.com/ysPYnUczfE

There the Braves were, at home in Game 1 of the NLDS, in prime position to set the tone in this series, with a chance to pile on the St Louis Cardinals by padding a 3-1 lead in the seventh inning.

And the phenom picks that occasion to go déjà vu, following it by going brain dead after he does get to second base:

It's never a good idea to give the opposition any sorta shot at coming back, something Braves vets knew and Acuña's now been reminded the hard way.

Cardinal bats woke up in the 8th and 9th, plating six runs before holding on to post a vital 7-6 road victory:

Being real, there's no way of knowing how the Braves' 7th woulda played out if Acuña had dialed in a bitta urgency. Still, there's no disputing he denied his team an opportunity.

He's got talent oozing outta every speck of DNA in his body:

Because when he doesn't, dude's still a game changer. Just not in a way his teammates would prefer.