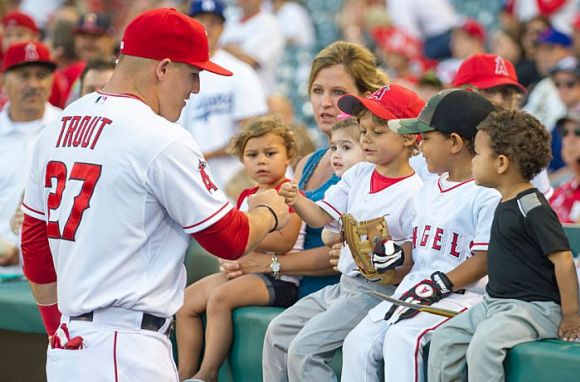 Somewhere in the great beyond, Babe Ruth is watching Mike Trout highlights and shaking his head in disbelief.

The Angels' $430million dude channeled his inner Bambino recently by promising a homer and then delivering on said promise, because of course he did.

The homer request was made by a seven-year old Trout enthusiast named Gavin Edelson, who apparently just wanted to see a dinger for no particular reason.

Since the two-time AL MVP can do pretty much whatever he pleases on a baseball field, he was more than happy to oblige.

We're not crying, you're crying.

As that intrepid reporter explained, Trout had already met this little dude previously, inviting him onto the field for batting practice and eventually homering for him last year in Baltimore.

Fortunately, this kid isn't terminally ill or anything, but that doesn't make Trout any less heroic.

In addition to being the most talented ballplayer on this Earth, Trout also appears to be a fine human being, as he seems to do cool shit with kids all the time.

Please don't look at us.

It's really quite tragic that Rob Manfred and his crack marketing team can't do anything with all this material beyond blaming Trout himself for his lack of exposure.