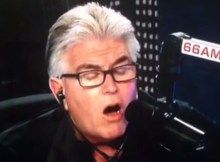 It almost feels wrong to screw with Mike Francesa anymore, but the large bag of wind just makes it so damn easy.

Just to pick one example completely at random, you may be aware of Big Mike's penchant for falling asleep on the air.

Yes, the pro's pro has actually drifted off on more than one occasion in the past, but the ravages of old age and his seeming disinterest in his work make these episodes more likely to happen.

Mike, please try to stay with us.

The technologically savvy host was entertaining one of his rare non-troll callers last week when he simply couldn't pretend to be interested any longer.

Mike Francesa catches a quick nap while a caller complains about how boring baseball is. pic.twitter.com/ArZC7l0SZ8

You must understand that Big Mike is a well-trained and highly compensated professional broadcaster, so who are we to question his methods?

That being said, the dude was absolutely asleep on the air, if only for a moment.

The sudden twitch and subsequent disorientation are classic indicators that can't be ignored.

Besides, this living legend and man of the people would never allow one of his callers to praddle on that long without shutting it down with an insightful groan or sigh.

And we must acknowledge the irony of someone dozing off while listening to someone else deliver a monologue on the lack of excitement in baseball.

Of course, the delusional Pope insists that he has never ever fallen asleep on the air, despite overwhelming evidence to the contrary.

"But I can promise you.... I was never asleep!" pic.twitter.com/v5PFoHrl86

That was a much lengthier nap from back in 2012, in the middle of an interview, no less.

And here's another narcoleptic episode from 2014:

His glasses were no match for that rogue microphone.

While these are of course endless fun, the systematic trolling of his show really makes the magic happen.