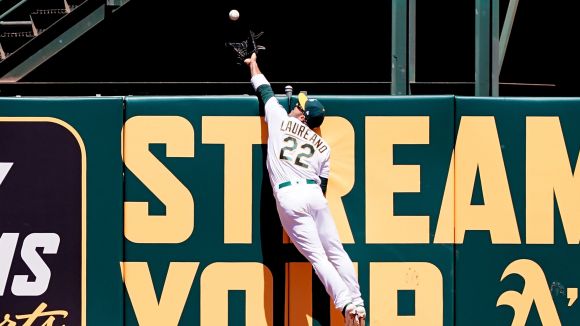 Where do the Oakland Athletics find these dudes?

With the superhuman highlight reel he's compiling, the A's musta been scouting Krypton or something.

Dude's actually yet another Dominican phenom who was a 16th-round draft selection by the Astros back in 2014. He gradually got the hang of pro ball after a slow start in the low minors and improved his way up to AAA when Beane spotted him and made a swap.

Houston got Brandon Bailey, who's never been anywhere near Krypton.

Laureano's been rather dynamic in rising to legendary status, and he just keeps adding to it.

Like making yet another leaping catch at the wall and then overthowing first base on the fly that actually was key in completing an 8-2-4 double play that you just don't see every day:

Dude could be the Dominican Republic's next -- first? -- two-sport athlete in the 2020 Summer Olympics if its baseball team gets there and if someone thinks to put a javelin in his hands.

Just because it's cool, here's a compilation of what Laureano's done prior to adding this season's fireworks:

And to think this season's still only a month old.