Kimbrel's Back in Action, Rings Up First Save for Cubs 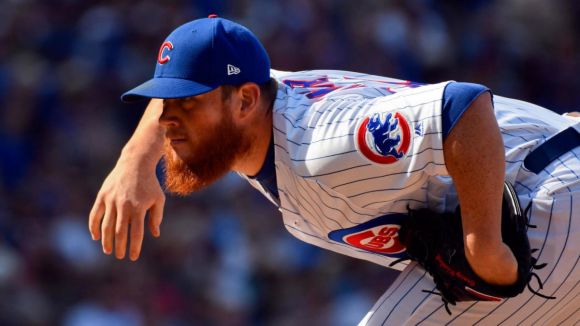 A near-universal pre-season prediction was the National League Central being MLB's toughest division.

It won't be the winningest, but none of the clubs have been able to separate from each other. There are only 6½ games separating first place from last.

With the season half gone, it's MLB's only division that anyone could claim.

This means five teams are barreling toward the 1 Aug trading deadline looking for any edge they can possibly uncover. It really could make a difference.

But first, the Chicago Cubs decided to shop in the high-rent district and came away with closer extraordinaire Craig Kimbrel:

Dude was one of the crew who never got the memo that clubs didn't have to collude to decide they weren't gonna rush to sign players who refused the mandatory qualifying offers at the end of their contracts last fall.

Bryce Harper was in that group, and he wasn't in a rush, either.

Kimbrel and Dallas Keuchel were the last to find a deal, but at least they landed on contenders.

After four outings at AAA Iowa, Kimbrel finally got the call, and Joe Maddon wasted no time calling his number.

The Cubbies had already rallied from five runs down against Atlanta to take a 9-7 lead into the ninth, so it was a perfect situation for the former Brave to embark on his shakedown cruise.

Naturally, it included a bitta drama at the end:

He almost BioFroze himself into the tying run striding to the plate.

Back in the days when Earl Weaver walked this earth and Tony LaRussa hadn't been anointed at the Father of the Closer yet, the Baltimore Orioles employed a reliever named Don Stanhouse. Dude ultimately got the job done, but not before justifying Weaver's nickname for him:

Dude was sailing in turbulent waters for a fair share of the season in Boston last year, and now he goes Spaceballs in his first appearance at Wrigley.

Maybe it's just a coincidence covered in a bitta rust.

Theo Epstein & Co had better hope so. They just laid out $43million over three years for Kimbrel to add more saves to his all-time leading total of 334.

Chicago's not gonna care how he gets them. All that matters is that he does get them. Besides, they cut off beer sales in the part in the seventh inning, and neither Epstein nor Maddon smoke.