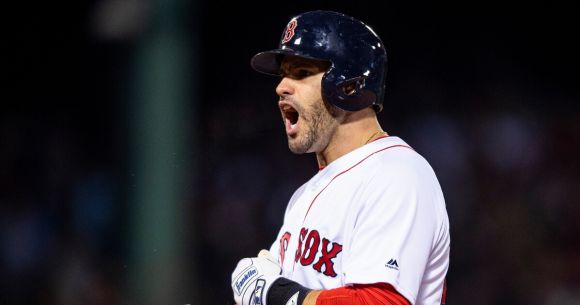 It's time to hand out some awards.

And because it's MLB, there are quite a few of them.

They figured out long ago how to max their off-season PR and turned it into a science.

While JD Martinez didn't take home a precious Dundie, he did win not one but two Silver Slugger awards, something that's never, ever happened before.

For those of you not familiar this prestigious honor, the Silver Slugger is awarded to the best hiiter at each position in each league.

Because Martinez played 57 games in the outfield for the World Champion Boston Red Sox, he apparently met the criteria for that position.

The former Astro, Tiger and Diamondback also qualified at DH, which is considered a position by whatever governing body handles such things.

Martinez also collected the AL Hank Aaron award, so his garage is rapidly filling up with hardware.

The Red Sox did pretty much everything correctly this season, including signing the 31-year old Martinez, who enjoyed a career year at the plate.

Here's some visual proof for you skeptics out there:

Dude was even clutchy in the post-season.

Since we're already here, let's give him the taking Clayton Kershaw out to dead center in a World Series game award.

Perhaps an acronym would be appropriate.