Published on 8-Aug-2021 by Alan Adamsson 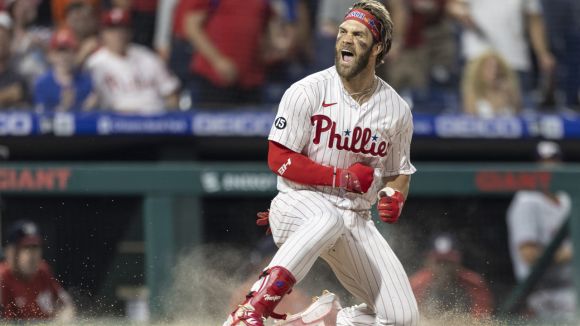 It's not easy exceeding a Philadelphia sports fan's hopes.

That's because they don't hope. They expect. All the time.

New York and Boston get all the press about being a tough place to play, but the City of Brotherly Love has got a hard edge when one of their teams isn't producing where its fans think it should be.

If anyone walks the walk, it's them:

And it's not for everyone. Not even close.

It's not surprising, then, that ever since the Phillies signed Bryce Harper, they've been expected to be a perennial playoff contender, especially in what's been a low-cal National League East.

Currently, that total of post-season appearances stands a zero.

In fact, the Phils haven't sniffed October baseball for ten years, now. Even then, dudes stuck around long enough to take one whole series -- the 2011 NLDS -- to the max before bowing to St Louis. That was the end of a five-season run that included a 2008 World Series title over Tampa Bay.

The year when Philadelphia returns to the playoffs.

As of this date, seamheads everywhere agree that this club has the softest schedule in all of the MLB. Their remaining opponents' combined winning percentage is .453 and with lotsa Pirates and Diamondbacks games still to come, that figure oughta dip even more.

What's more, while other contenders will be beating each other up, they'll finish the season with 10 of their last 13 games coming against the woeful Orioles, Pirates, and Marlins.

And who shall lead them?

Currently, dude's having the second-best season of his career:

Harper was MVP in his rookie year (2015), and if he keeps his current performance up, he'll be in the mix for that award again, except this time, he'll have a shot at being on a playoff series winner.

For some reason, his career's been somewhat incognito since 2015, but consider this:

What's more, the Phils have now put together a season-high eight-game winning streak and vaulted into the NL East's top spot.

That'd due to the latest three triumphs coming at the expense of New York's Mets:

So, at this particular point, the Phillies are actually meeting their rabid fans' expectations.

And, no doubt, Harper's.

Anything less would be ... less. In a city that boasts the most out-there mascot in sports, that wouldn't be good.

They'll be taking no prisoners from here on out.