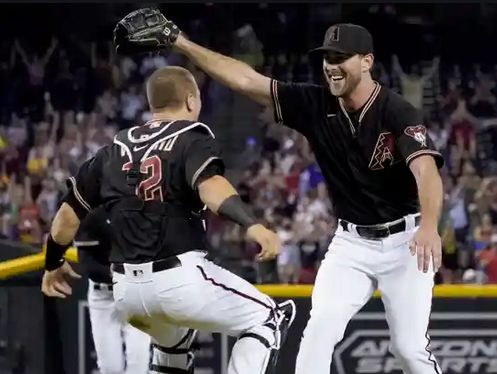 Across the pond in Jolly Olde, the slang for describing an electrician's vocation is they're in sparks.

For one night in Chase Field, a 27-year-old southpaw who'd thought his baseball career was over and switched into aspiring electrician mode wound up dealing sparks for MLB's worst team and came away with a bitta Diamondback history.

Tyler Gilbert had just done something that ...

Dude became the answer to a couple of trivia questions by ...

Somewhere in the cornfields, three non-legends are welcoming Gilbert to their No-No in a Debut club:

As for apprentice electricians throwing an MLB no-hitter, he's in a class by himself.

Gilbert's MLB draft class was 2015, when the Phillies took him in the sixth round. He'd knocked around in the minors since then, ultimately winding up as MiLB roster fodder in the deep and talented Dodgers organization. It's what exposed him to the Rule 5 draft, where Arizona rolled the dice and selected him.

Even though Gilbert spent most of his pro career as a reliever, the Snakes projected him as a starter, so the fact that his night against San Diego became his night is even more improbable.

If that's not enough to warm the left cockle of a seamhead's heart, then very little is.

Notably, this is the season's eighth no-hitter, tying a record that's stood since 1884. Coincidentally, that's also the first year baseball allowed overhand pitching and hadn't gotten around to the impact of spin rate yet. Gilbert's gem was the first this year since spin rate was mitigated by MLB's mid-season clampdown on sticky stuff.

As if accelerated spin rate was ever gonna be part of Gilbert's game.

Dude did it the old-fashioned way, by shifting speeds, picking his spots, and keeping hitters from following Wee Willie Keeler's maxim of hittin' 'em where they ain't.

In fact, that's an impressive fact about Gilbert's feat, too. Not for nothing does Arizona have the National League's worst record; the team's defense has played a key role in that stat. Plus, they do it in a yard that's favorable to hitters.

By the time this day's slate of games were well underway, it appeared for a while like no-no's were gonna break out everywhere:

All three of those chuckers are more accomplished than Gilbert, but in this time and space, Gilbert has now accomplished more than them.