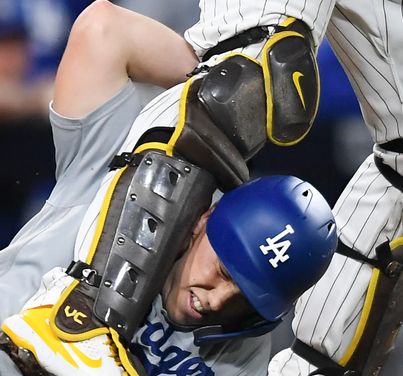 To those infidels who would dick around with the very essence of the Grand Old Game ...

August may be baseball's grind-it-out dog days, but not for those clubs who still have dogs in the hunt.

Every game has an edge to it as they race to October, and series like this one becomes a personnification of intensity.

These situations are as old as the sport itself, and on this occasion, they weren't gonna let any bloody new rules get in the way of a death match.

And that's damn near what it was.

The @Dodgers bullpen went 9.1 innings and allowed only one hit in tonight's game.

And yet, they couldn't pull away from the Padres, whose hurlers scattered hits to the same effect.The result was a 1-1 stalemate after nine:

So on it went to the extras, plagued as it has been all season by starting an inning with a runner on second. The rationale was to deploy this high school tiebreaker to lessen wear-&-tear on ballplayers coming off the abbreviated 2020 season, as if the occasional extra-inning game was gonna be that consequential.

The baseball gods don't take to such insolence kindly, and it showed.

Instead, this one brought home the old bromide that if you go to any game, you just might see something that you never saw before.

Then he allows the tying home run to Fernando Tatis Jr., sending the game to 16 innings, the longest in the history of the runner on second rule by 3 innings pic.twitter.com/rn2rheykPe

Most of MLB's hitters who aren't 2017 Astros don't really want to know what's coming, anyway. They're more into read and react, believe it or not.

If only they woulda done that on the basepaths. Extra-inning decisions weren't either team's shining moment.

That goes for fundamentals of defense, too. Little Leaguers will tell you not to throw over a runner in a hotbox; you step out to the receiver's glove side. That almost cause a wild throw, too:

Ultimately, it all came down to AJ Pollock.

Dude might've had an idea what was coming by simply observing Daniel Camarena in the 15th. Then again, he might not have. Whatever the case, he finally put an end to the proceedings in the 16th with an old-fashioned blast.

As one would expect in a marathon like this,

Los Angeles needed this to remain 2½ games behind the Giants. The scoreboard already posted the news that Cincinnati lost, so San Diego didn't cede any ground to the Reds for the second Wild Card slot.

After a 16-inning loss at home, the Friars were probably too tired to feel any better, either.

And Rob Manfred needs to take a bitta wise advice from NBA Commish Adam Silver about trying to speed up the game:

Don't mess with the pace of play.
It gives fans more time to place bets.

Now, there's a leader who sees the future a lot clearer than Manfred does.