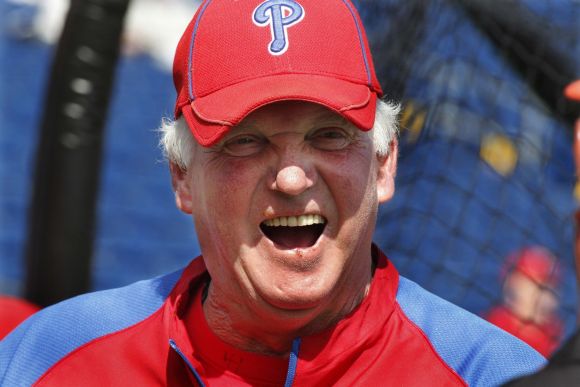 The position of MLB hitting coach is often rife with peril, as these dudes tend to be popular scapegoats for failing offenses.

Similar to umpires, if you hear their name spoken aloud, something has probably turned to shit. Just ask Mark Budaska.

However, we may have found an exception to this rule.

In an effort to cure their offensive malaise, the Philadelphia Phillies decided to dust off former manager Charlie Manuel, who's apparently been preserved in a jar since being fired by these very same Phillies towards the end of the 2013 season.

While the 75-year-old Manuel is quite the quilter, he's also still something of a hitting savant, even at his advanced age.

Brought back to revive the dormant Philly bats as temporary hitting coach, the remarkably spry winner of exactly 1000 MLB games as a manager got to work immediately.

Yep, good ol' Charlie had been back in the dugout for about 10 minutes or so, just long enough for the Phillies to put up an 11-spot on the road-challenged Chicago Cubs.

The following night, Philly waited until the bottom of the ninth, when Bryce Harper, clearly acting on orders from Manuel, walked off with a grand salami.

Of course, the horrifically bad Cubbie bullpen should receive some of the credit, but the rest definitely goes to Charlie.

Fortunately for the Phillies, they already had Manuel on hand as a senior advisor, so he didn't have to amble far to help out.

That early bird could be a problem, though.