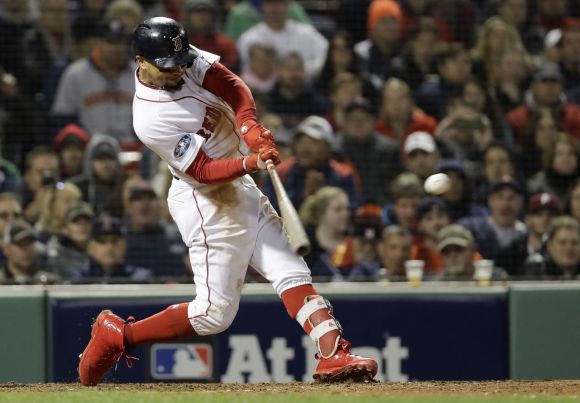 The Houston Astros could head home from freezing conditions in Boston and be fairly pleased with themselves.

After all, they took home field advantage from the Red Sox by winning a bizarre Game 1.

But in the nip of time -- yes, nip and not nick; ballaclavas were worn -- the club that went 54-27 at Fenway overcame an early two-run deficit and edged away with a 7-5 triumph to square the ALCS at a game apiece.

To be fair, there were scores of hearty BoSox fans in early autumn garb. It was the 'Stros who reacted to temperatures between 45º and 52º as if Greenland had invaded and brought their air with them.

Until this sorta slide into second happens, they should just chill:

The 'Stros kept with the theme, though. After a George Springer double produced a pair of runs in the second and a Marwin González dinger scored two more, Houston's bats went cold.

Credit that to Boston's much-maligned bullpen, even if Rick Porcello chipped in an inning. The big news was David Price starting a post-season game that the Sox won. That's a first.

Dude didn't missed qualifying for the win by a third of an inning, but manager Alex Cora could take no chances. Price had surrendered four runs -- all with two out -- on five hits, with a BB:K ratio of 4:4.

Whatever happens in this game from here on out, the one thing that won't happen is: WP - Price.

11 consecutive postseason starts without a win ties the record for any stretch of postseason GS. The others with 11: Tim Hudson and Al Leiter.

Otherwise, it was the BoSox bats that heated up, Mookie Betts and Jackie Bradley Jr in particular.

Dudes led the way as Boston became the first team this season to lay a 5-spot on Gerrit Cole:

These teams split a four-game series back around the first week of June. Houston took the first two before Boston recovered to make it a wash.

There won't be any wash this time, but there doesn't have to be. Boston wouldn't mind returning back to deep-autumn evenings in Massachusetts. They're gonna need Astro-like consistency to do it.