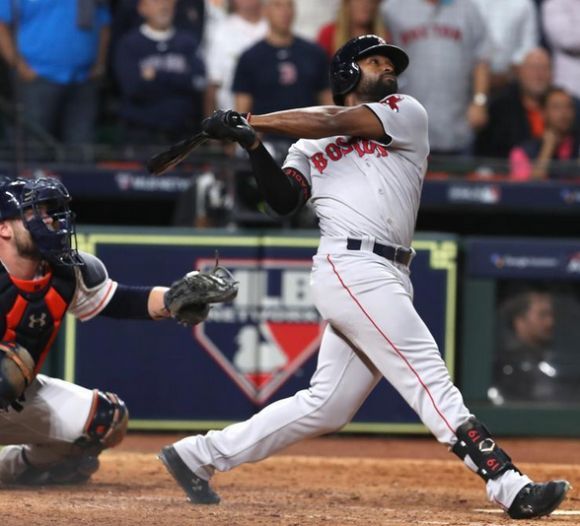 So far in this season's playoffs, the Boston Red Sox offense is showing why it's here.

Sure, the pitching and defense are helpful, but dudes are pounding out an average of six runs a game so far.

That does include the 16-run outburst against the Yankees, of course, which more than pulls up the losses where they only plated two runs in each.

But the fact remains that they're raking, early and often.

After ALCS Game 1's modest downturn in production in their lost to the Houston Astros, the bats started rattling again in Game 2 and have continued to Game 3, where to BoSox delivered an 8-2 pounding that only became that when Jackie Bradley Jr sealed the deal by doing the El Smacko Grande thing in the eighth.

Dude & Crew were doing this to back up Nathan Eovaldi's solid 6-inning stint where he yielded only 2 runs on 6 hits and posted a 2:4 walk-to-strikeout rate:

Before the game, 'Stros 3B Alex Bregman posted a bitta pre-game motivational material on Instagram, which was Eovaldi getting ripped for back-to-back jackes when the BoSox visited Minute Made in June:

Bregman’s instagram story right is a video of the Astros going back-to-back-to-back dingers off Nate Eovaldi in June.

Unfortunately for Houston, no redux and no Plan B.

The way this series is shaping up, they'd better find someone besides Justin Verlander that can fence in Boston's lumber yard, or this'll be a shorter post-season chapter than everyone expected.