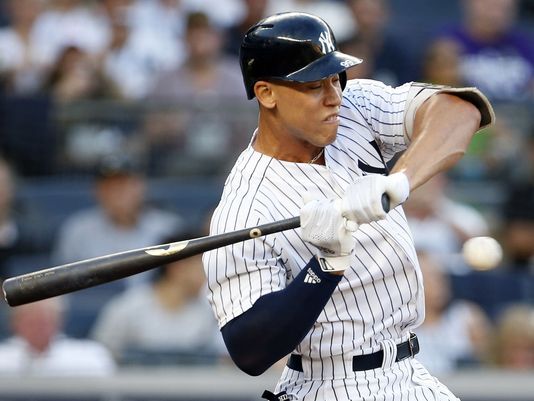 The hell of it is, dude stayed in the game for another at-bat.

No one can say Aaron Judge isn't a warrior.

As a matter of fact, it isn't the minor detail that the New York Yankee right fielder broke his wrist that's put him on the shelf for three weeks or so.

That's depending on how his 1-800-FAITH-HEALER call goes.

In Judge's case, they rode the seams of a Jakub Junis heater.

Pain wasn't the reason Judge was pulled, either. Dude was the DH in this game and actually made another plate appearance, notching an infield single on a swinging bunt.

That was when manager Aaron Boone knew something was wrong. Judge showed zero power from his right hand.

It's probably also why the developers of the XProTex batting glove are smacking foreheads yet again. Constructed with Kevlar -- the same material that goes into bullet-proof vests -- it diffuses contact to the point that a 100mph fastball has the equivalent of a 35mph impact, which is slower than Little League pitches.

This isn't meant to be a plug for XProTex. It's just the facts ...

Judge may not be out long enough to add another DH-type -- José Martínez from St Louis, maybe? -- the Bombers are having trouble enough as it is keeping up with Boston's Red Sox.

So why not pick up another pitcher?

Probably not, but JA Happ can run harder than Gary Sánchez.

Everyone knew he was on his way outta TO:

Dude's a useful pickup, but the deal still has all the signs of New York keeping him away from the BoSox.

Which, of course, is part of their plan for catching up to the BoSox.

In other words, the injury is good timing. On paper, only tough series is in Boston. New York’s loaded lineup & deep bench is capable of handling matchups above.

Not sure if Judge or his teammates would agree with that, but as what's done is done. They may as well look at a half-full glass as opposed to the alternative.