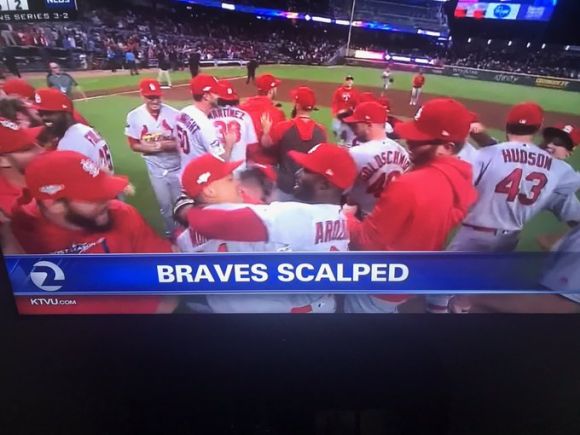 Sometimes, having just one reasonable person in the room is enough.

However, that voice of reason isn't always there.

That's when we're treated to stupid human tricks that alienate an entire culture in one completely tone deaf moment.

After the Atlanta Braves were bounced out of the MLB playoffs at home in savage fashion by the St Louis Cardinals, the requisite stories were run across the country.

There was one report in particular that raised a few eyebrows:

Man, I can’t believe the kind of stuff they put on TV back in the... OMG THAT’S FROM TONIGHT SERIOUSLY SO BAD. pic.twitter.com/MXUWYVvHIU

Ah, what a delightful turn of phrase.

That remarkable headline was courtesy of the Fox affiliate KTVU in San Francisco, and it didn't go unnoticed:

Scalped? Scalped? Seriously? How totally devoid of sensitivity and social awareness. Shame on you @KTVU https://t.co/VR29n3ZKxv

Somehow the crack staff at KTVU was completely unaware of the tomahawk chop subplot that pervaded the entire series between the Braves and Cardinals.

But then again, this very same station once produced the following report:

Yep, those names were confirmed.

We've received word that the station will be organizing a cultural sensitivity retreat this weekend.

Just follow the trail of tears to find the location.