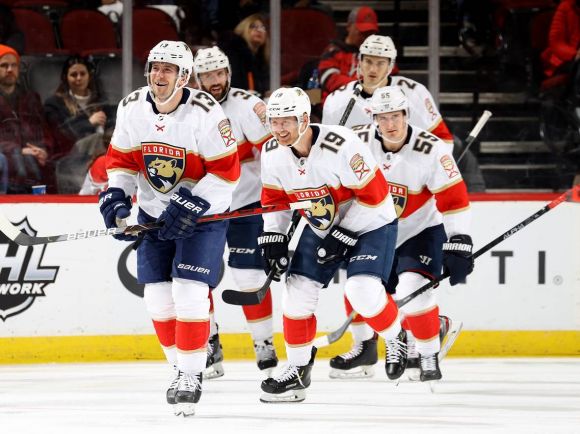 They called it the helicopter line.

As in no wings.

With the Florida Panthers in hot pursuit of a playoff spot -- and it's never too early for these dudes to be zeroing in on one -- coach Joel Quenneville was looking for something to snap his club outta a pesky four-game losing skid.

He ultimately decided on a twist that was true to his defenseman's roots.

Therefore, when Coach Q rolled out his lines for their game in New Jersey, he replaced his fourth-line wings with a pair of defensemen flanking center Noel Acciari: Mike Matheson and Mark Pysyk.

How could any old-time hockey aficionado not get a tear in his eye at the sight of four d-men on the ice at the same time?

Maybe Quenneville was thinking more of this grouping becoming an ultra-grinder line, but instead -- or maybe he had a feeling -- he'd unleashed a scoring machine in the Panthers' 5-3 victory over the Devils.

It's not like this is a total surprise based on an OG's hunch with a hint of yearning for yesteryear.

Pysyk's been doing double duty here and there for a while. He got off to a slow start up front earlier in the season, but lately, the strategy has been producing rave results.

Perhaps their scoring is just icing on the cake. Quenneville's primary intention is that they serve as ultra-grinders. When incessant forechecking and puck possession come together, rewards ensue.

Dual-role assignments feature blueliners more often than not for the simple fact that their skating skills are usually more well-rounded.

While Pysyk has had time to acclimate, Matheson hasn't. This was his first time playing up front. He'd been a healthy scratch the game before in Philadelphia, so maybe he had extra incentive to give this opportunity a balls-to-the-wall approach.